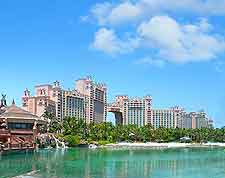 New Providence is the most significant island within the Bahamas and is home to more than 65 percent of the archipelago's total population. Nassau is located on New Providence and is the Bahamian capital, being the largest city in this tropical island chain.

Lying just south of Paradise Island, Nassau resides at the top end of New Providence Island and bustles day and night. There is an almost endless array of sights here, including old Bahamian architecture, museums, galleries and shops. 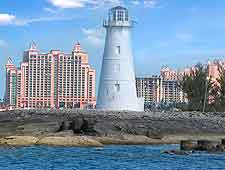 Paradise Island is a beautiful little island off the north coast of New Providence. It has fine beaches and the flashiest accommodation in the whole of the Bahamas. The mega hotel resort of Atlantis resides here, a five-star place with every conceivable facility, including a private beach, shopping malls and a glamorous casino. Tourism is big on Paradise Island - especially in the winter, when vacationing New Yorkers arrive.

Paradise Island is beautiful and has virtually all that you could desire on a holiday, including a golf course and endless attractions for the kids. While there is no official tourist information office, everything you will need to know is within the hotels. Alternatively, head to nearby Nassau, where the Bahamas Ministry of Tourism resides, on George Street. 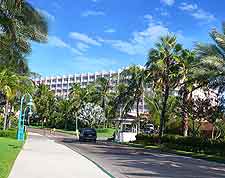 The Bahamas is renowned for its handsome beaches and soft white sand, and New Providence is certainly no exception to this, with Cable Beach being amongst the most popular and easily accessible from Nassau. A number of beachfront resorts are based here, where various water sports are available, such as both reef snorkelling and windsurfing. Paradise Island is also home to a selection of beaches, with Cabbage Beach ranking amongst the most frequented and being a good place for jet skiing, parasailing and fun inflatable banana boats. More information about Nassau Beaches. 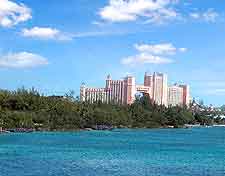 If you are prepared to hop between New Providence and Paradise Island, you will be able to enjoy the best of both islands. In Nassau, various cruises and boat trips are available, often stopping off at attractions along the way and allowing time for snorkelling, swimming, beach activities and an all-inclusive barbecue lunch. Also in Nassau is the Ardastra Gardens, Zoo and Conservation Centre, and the hand-feeding of friendly lorikeets here is a big draw. On Paradise Island, much of the tourism is centred around the enormous Atlantic Casino resort, where the replica of the 'Lost City of Atlantis' (named 'The Dig') is to be found, along with an epic water park complete with thrilling water slides entitled the Leap of Faith, the Serpent Slide and the Abyss. Also on Paradise Island is the family friendly Dolphin Cay, the landscaped Versailles Gardens, and the bustling shops at the rather pricey Marina Village. More information about Nassau Tourist Attractions. 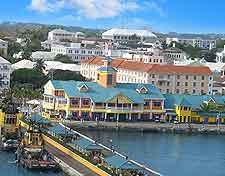 Some of the region's most impressive landmarks are based on Paradise Island, with both the Atlantis Resort and the One&Only Ocean Club offering lots of memorable sights. The latter is home to the French Cloister, which is located within the Versailles Gardens and actually originated from 12th-century France. In Nassau, it is the 18th-century Government House and its palatial pink and white Georgian facade that adds a touch of elegance, away from the more modern and glitzy beach resorts. Close by and just off the Western Esplanade is Parliament Square, which stands a block away from the Court of Appeal of the Commonwealth of the Bahamas and is where you will find the House of the Assembly, the Public Library, the Senate and the Supreme Court. More information about Nassau Landmarks and Monuments. 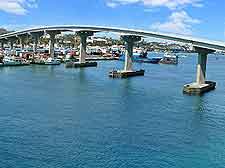 Even though it would be true to say that most people choose to holiday on the Bahamas for the sun, sand and sea, there are a handful of cultural offerings dotted around Nassau. The Pirate Museum is one such attraction and is located in downtown Nassau, where it provides fascinating information relating to the Golden Age of piracy, roughly 300 years ago, when this very city attracted the biggest concentration of pirates in the whole of the New World. Another cultural attraction of note is the Pompey Museum at Vendue House, with its exhibits recounting the lives and travels of Bahamian slaves. For those in need of a fine-art fix, the National Art Gallery of the Bahamas contains paintings by some renowned artists from the Bahamas and the Americas. Close to Cabbage Beach on Paradise Island, the Junkanoo Mini-Museum is also worth a mention and celebrates local music, dance and 'Junkanoo' street processions. More information about Nassau Museums and Nassau Art Galleries. 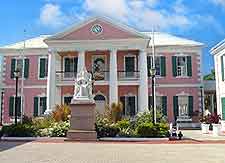 The Bahamas has so much to offer that it makes a lot of sense to get out and about, taking a ferry trip or a short flight to neighbouring islands. Particularly close is the Blue Lagoon Island, where natural beauty abounds and snorkelling is a major attraction. To the north of Paradise Island is Great Abaco, an island renowned for its scuba diving, with further attractions here based around Cherokee Sound, Hope Town, Marsh Harbour, Sandy Point and Treasure Cay. Other islands within reach of Nassau include Andros, Eleuthera, Great Exuma and San Salvador, the latter of which features natural beaches, an imposing cathedral and information about the time that intrepid explorer Christopher Columbus landed here many years ago. More information about Nassau Attractions Nearby. 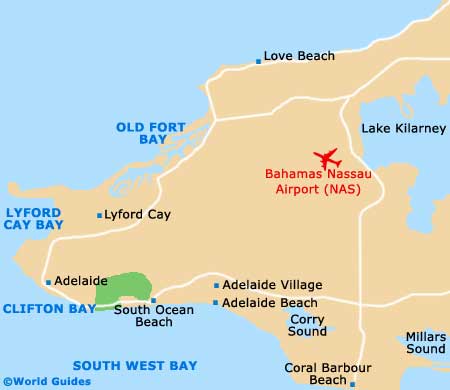