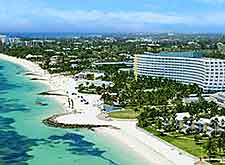 Squeaky white beaches, warm Caribbean water and a respectable amount of protected natural area makes the island of Grand Bahama one of the most popular holiday retreats in the Western Hemisphere. Providing the urban scene are the modern planned cities of Freeport and Lucaya, with their luxury resorts, busy nightlife and attractive dining and shopping options.

Tourism is the engine of life on Grand Bahama, which at just 80 km / 50 miles from Florida receives a steady flow of visitors all year round. Tourist information about this classy island destination can be found at the Grand Bahama Island Tourism Board in the Freeport Fidelity Financial Centre or at one of its three smaller booths - at the airport, Lucayan Harbour or at the Port Lucaya Marketplace. 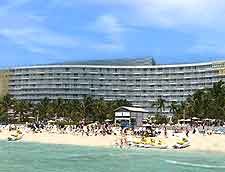 The city of Freeport is known in the Bahamas as something of a financial centre, with its organised infrastructure and technology businesses. Tourism arrived in a big way during the 1970s, when the Bahamas gained its independence and neighbouring beach resorts began to boom. The Caribbean beaches surrounding Freeport and Lucaya are typically tropical in their appearance. In Port Lucaya are a number of appealing beaches, with the most popular including both Lucayan Beach and Silver Point. 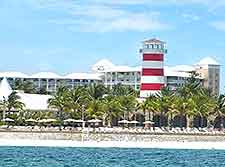 Other noteworthy beaches around the city include those of Barbary, Churchill, Fortune, Gold Rock, Taino and Xanadu. In general, if you head towards McLean's Town or Sanctuary Bay, you are likely to find somewhere pleasant to sunbathe, swim and relax. More information about Freeport Beaches.

The Bahamian beaches surrounding Freeport present a number of opportunities for those enjoying a holiday. Scuba diving and snorkelling around Grand Bahama have never been more popular, with nearby reefs such as the East End Paradise coral gardens being connected by regular dive trips from Port Lucaya. Pleasure cruises around the coastline also appeal to tourists, with glass-bottom boats providing an interesting view of the sealife beneath. 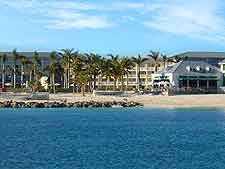 The adjacent town of Port Lucaya is where much of the action happens on the island, with its bustling marketplace and plentiful shops, bars and entertainment. Port Lucaya is the place to come if you fancy trying your hand at parasailing or jet-skiing, while for something with a little more culture under its belt, the regular shows staged at the Freeport Regency Theatre may be of interest. If you prefer to relax amidst pleasant green surroundings, then consider either the Garden of the Groves or the rather more freeform Rand Nature Centre, where the headquarters of the Bahamas National Trust resides. More information about Freeport Tourist Attractions. 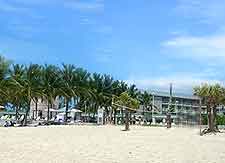 Freeport has little history to speak of, with much of its wealth being derived from the purchasing and re-selling of oil to the USA. The most obvious landmarks are those condos and resort towers built in recent years to tap into the increasing tourism market. Particularly impressive is the giant International Bazaar shopping complex and its endless stores. Almost next-door, the Straw Market offers something far more traditional and Caribbean in character. When the sun begins to set, the Casino at Bahamia and the Margarita Villa Sand Bar are two of the most exciting establishments worth checking out in this part of Grand Bahama. More information about Freeport Landmarks and Monuments. 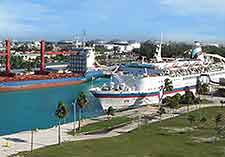 The museum scene in Freeport is pretty much non-existent, although there are some good galleries on hand, with information about local artists from around the Bahamas and beyond. At the Port Lucaya Marketplace and the International Bazaar, galleries specialise in the exotic and Caribbean, with paintings, prints and photos being available for purchase at reasonable prices. At the International Bazaar, the fragrance of the Perfume Factory may well attract your attention, with visitors being able to mix up their very own blend of scents in the onsite laboratory. More information about Freeport Museums and Art Galleries. 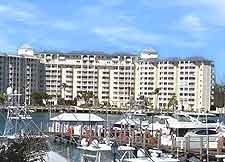 Freeport is the perfect place to base yourself if you have day trips in mind, particularly since the Grand Bahama International Airport is so close by. Tourists will find that the vast Lucayan National Park is just a short distance to the east, with its mangroves, isolated beaches and network of underground caves. A little closer to Freeport are the attractions at the tiny Peterson's Cay National Park, where snorkelling day trips and exotic wild birds are amongst the main reasons to take an excursion here. Families may like to spend time visiting the Dolphin Experience or the island capital of West End, the latter of which lies around an hour to the west and is home to the Paradise Cove beach resort, the Hawksbill Creek and a vibrant marina. More information about Freeport Attractions Nearby. 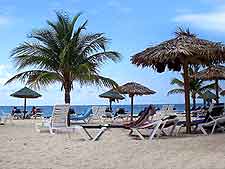