Worcestershire is a county of two halves. The south is mostly rural, with pretty villages and rolling countryside. The accents you hear around these parts aren't too dissimilar to those found on the popular and long-standing English radio series 'The Archers'. The north, on the other hand, has a more industrial feel to it, bordering as it does on the West Midlands conurbation. Here you are much more likely to hear people speak with accents that are more akin to Birmingham and the 'Black Country.'

Drive through the southern part of Worcestershire, an area that is bordered by the Malvern Hills and the Cotswolds, and you will be amazed at the sheer scale of market gardening that takes place here. The Vale of Evesham is a veritable fruit and vegetable basket, with its proliferation of orchards and crop-covered fields.

Still on the foodie theme, Worcestershire has its very own condiment, a fermented liquid that was created by Lea and Perrins in 1837. It has been adding flavour to such English gourmet delights as cheese on toast ever since.

It is easy to see why some people believe that Worcestershire inspired J. R. R. Tolkien to create the fictional region known as The Shire, which featured in his books 'The Hobbit' and the 'Lord of the Rings'. Whilst you are not likely to find Bilbo Baggins here, you might recognise his house, Bag End, which is thought to have been based on a farmhouse in the village of Dormston, owned by Tolkien's aunt.

At the heart of Worcestershire is its county town, a place that features a rather splendid cathedral and has long-standing connections with that world-renowned porcelain crockery company known as Royal Worcester. 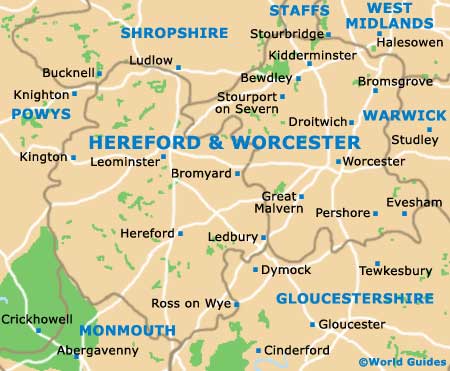