Whether you arrive in Cheshire by train or car, it can't fail to escape your notice that this is a very rural county. It is dominated by a landscape of green fields dotted with black-and-white cows, picturesque red-bricked farmhouses and old-fashioned market towns. It may be close to the urban centres of Manchester and Liverpool, but in many parts of the county you really would be hard pressed to tell.

In keeping with its rural face, it is worth noting that Cheshire is particularly famous for the production of a type of crumbly cheese. Each year, a prestigious international cheese show is held here. Cheshire cheese is reputed to be one of the oldest to be made in the UK. In fact, it is claimed that, in centuries gone by, it used to be the British Royal Navy's favourite cheese.

Cheshire wears its long history well. Many of its towns still show vestiges of a Tudor and Elizabethan way of life. Period timber-framed buildings abound in places like Nantwich, although many seem to lean in a precarious fashion, balanced on warped timbers and held together by little more than wattle-and-daub.

Such historic buildings can be viewed in larger quantities in Chester. This is an elegant city, located close to the Welsh border and inhabited since Roman times. Chester's streets tend to be crowded with shopping locals and tourists alike.

Cheshire's most enduring symbol is that of a very smiley fictional cat. The Cheshire Cat was the creation of the author Lewis Carroll and featured in his novel 'Alice's Adventures in Wonderland'. The grinning feline was said to be inspired by a sandstone carving in a church near to the Cheshire town of Warrington. 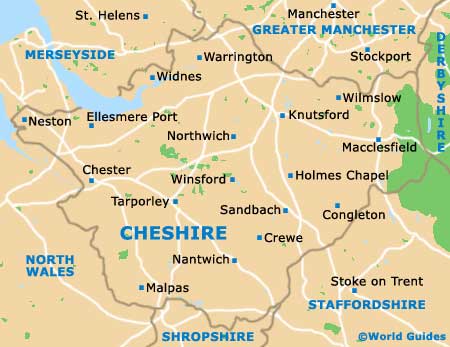