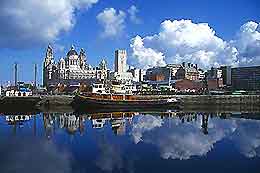 Liverpool, now classed as a World Heritage city, is full of culture, excitement and an important maritime history. Famous for its Mersey waterfront, Liverpool has recently redeveloped many areas and now boasts unrivalled architecture. The revamped trendy Albert Dock is especially appealing and comes complete with museums, cafés, bars and shops. Other vibrant districts include Stanley Dock, Waterloo, Wapping and the general Pier Head area.

Now a city of world significance, with an impressive university and emerging tourism industry, Liverpool is also known throughout the world for being the home of the famous rock band, The Beatles, at the time when the Mersey Beat was born. Queen Square Centre is where the city's helpful Tourist Information Centre is to be found, with further branches being located at the Albert Dock and also at the Liverpool John Lennon Airport (LPL). These TICs are a good place to purchase tickets for sightseeing bus tours and the popular duck tour, where an amphibious WWII vehicle transports tourists around the city roads and into the actual waterfront of the Albert Dock itself. 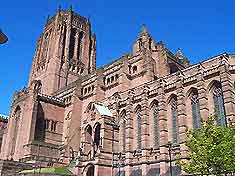 Liverpool has a vast selection of hotels, both within the city centre and the surrounding Merseyside area. The city lies either side of the vast River Mersey estuary and is relatively easy to find your way around on foot. Lime Street is where the railway station is located (part of the Merseyrail network) and stands on the easterly side of the city centre, next to St. George's Place and the Empire Theatre, and close to St. John's Shopping Centre.

Some of Liverpool's most popular sights include its Anglican Cathedral - standing proudly in the heart of the city centre with spectacular architecture; the Metropolitan Cathedral of Christ the King - a stylish, circular building built in the mid-20th century; the relocated Cavern Club - where The Beatles performed almost 300 times during the 1960s; 20 Forthlin Road - the house where Paul McCartney grew up, now owned by the National Trust; the Beatles Story Experience - housed in the impressive Britannia Pavilion at the Albert Dock area; the Town Hall - built in the mid-18th century, featuring a large dome and tall statue of Britannia; Goodison Park Stadium - home of Everton Football Club; Sudley House - an impressive manor house with a large collection of historic paintings, antique furniture and landscaped gardens; St. George's Hall - dating back to the mid-19th century with highly-acclaimed architecture and a vaulted ceiling; the Royal Liver Building - built in the early 20th century with tall towers, with one of the largest clocks in the United Kingdom; Cains Brewery - dating back more than 150 years in the Toxteth area of Liverpool; and Chinatown - featuring an imposing archway with spectacular attention to detail, and many superb Chinese restaurants. More information about Liverpool Tourist Attractions and Liverpool Landmarks. 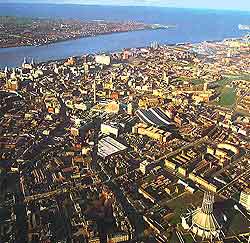 There are a number of excellent museums in this Merseyside city, such as the Liverpool Museum - one of the most important museums in the area, with impressive information about Natural History; the Merseyside Maritime Museum - located in the energetic Albert Dock area, home to an enormous amount of maritime artefacts; the Museum of Liverpool Life - with many historic city artefacts, including musical and sporting memorabilia; the Liverpool Football Club Museum - full of interesting exhibits and information about Liverpool FC; and the city's very own Tate Gallery - featuring a number of temporary exhibitions throughout the year and a large permanent collection of modern art.

Liverpool is also home to an enormous number of parks and gardens, all with large expanses of grassland and many with excellent facilities for sports. These include the Ness Botanic Gardens, Calderstones Park, Clarkes Gardens, Newsham Park, Princes Park and Sefton Park. There are many other attractions close to the city, such as Blundellsands Beach, Formby Beach, Birkenhead Warships, Mersey Ferries, Port Sunlight Heritage Centre, World of Glass, Gulliver's World Theme Park and the popular Chester Zoo.

The University of Liverpool is one of the leading universities in the United Kingdom, highly regarded for its teaching and excellent research facilities. With more than 50 different departments and schools, and almost 20,000 students, the university currently ranks amongst the city's largest employers, with members of staff now numbering approximately 4,500 people. Liverpool's university is highly regarded throughout Europe and covers more actual subject areas than most other universities in the entire country.

Liverpool is a vibrant and very diverse city to visit at any time of year. The weather and climate in the Merseyside area is generally at its best during the summer months of May, June, July, August and September, although the city of Liverpool does not generally have an 'off-season', remaining relatively busy throughout the year. 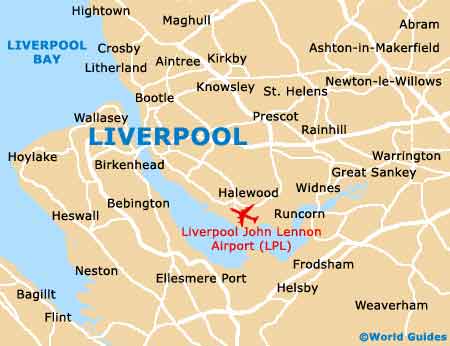