West Virginia isn't known as the 'Mountain State' for nothing. Almost the entire state is covered by tree-clad mountains. Whilst mining might once have been the top-earning industry here, nowadays that role is fulfilled by its green mountains or, to be more precise, the mountain-based outdoor activities that bring people and their money here.

Almost as dramatic as West Virginia's scenery is the bridge that spans the New River Gorge in the southwestern part of the state. Its dimensions are vast and it currently rates as the second-highest in the US. Completed in 1977, the bridge succeeded in reducing the long arduous drive on winding mountain roads to a short and sweet one-minute trip.

West Virginia shouldn't be confused with the state of Virginia. Although it was originally part of the British Virginia colony, it voted to separate and the new state of West Virginia was admitted to the Union in 1863.

When you think of West Virginia, it is hard to resist singing a snatch of that old 1970s John Denver number 'Take Me Home, Country Roads'. This song has always been well received by West Virginians and is often played at football games. However, attempts to make it the official state song haven't succeeded as yet. 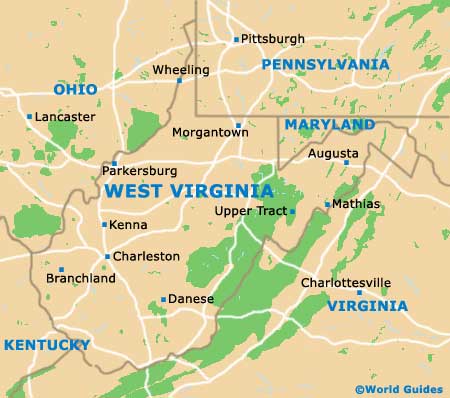