Backing onto the Canadian border, North Dakota is real northern frontier country. This is one of the least populated states in the US. It is also one of the wildest places, being home to the 'Badlands' - with its bizarrely shaped geological formations, and Devils Lake - the largest body of water in the state.

North Dakota wasn't always such an empty place. It was named after the Dakota Indian tribe, who lived here at a time when bison roamed the plains. The arrival of the railroad in the 1870s brought hoards of settlers, all intent on taking a plot of land for themselves. It also brought a young bespectacled president-to-be Theodore Roosevelt in 1883, who came here to hunt the said bison and went on to become a fully fledged North Dakotan rancher.

Both Fargo and the capital of Bismarck started out life as railroad communities. They were frontier towns that were distinctly rough at the edges. The Norwegians arrived first, followed by German immigrants and those with a British background. Most of today's North Dakotans are of North European descent. The town of New Leipzig even stages its own annual Oktoberfest.

Many people pass through North Dakota on the Interstate I-94. Head off the highway, and you can enjoy its rugged natural landscape and uncrowded attractions. It is little wonder that North Dakota attracts mainly outdoor types who like to hike or hunt. In particular, Kenmare is known as a hunting haven for snow geese. Of note, the Theodore Roosevelt National Park offers mile upon mile of trails, suiting those who enjoy hiking and walking.

North Dakota's extremely healthy outdoor image is backed up by Fargo's ranking as the city with the cleanest air quality in the US. 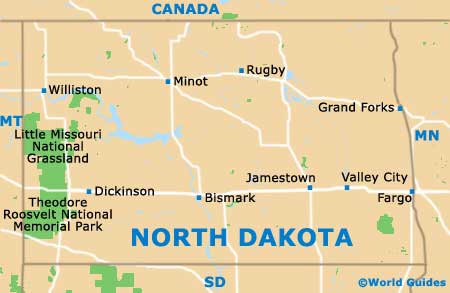