Virginia is like no other American state. There is simply so much history associated with this state that it seems everywhere you turn, something important once happened here. This is the home of the first permanent English colony. There is a saying that the state's history is pretty much the same as America's history. In other words, what took place here in those early days influenced other pioneering settlements in the New World.

During the American Civil War, Virginia was the Confederate capital. Its General Assembly is the oldest in this part of the world. Many key historical figures hail from this state, including the legendary Pocahontas. This Virginian Indian is said to have saved the life of captured Englishman John Smith in the year of 1607. She eventually married a tobacco planter and, as Rebecca Rolfe, became something of a celebrity in London. Eight US presidents were born in Virginia, including George Washington and Thomas Jefferson - hence its nickname as 'Mother of Presidents', a title shared with Ohio.

Over the years, the state has changed from being mostly rural and conservative to more urbanized and moderate in its political outlook. Like most US states, it has clung fiercely to its traditions. There is still a strong Virginia wine-making industry based here, while the state also has its own ham named after it, which can only be made in the Virginian town of Smithfield.

If visiting tourists can bear to tear themselves away from Virginia's past, they'll be rewarded with a glimpse of the Appalachian Mountains, some great beaches and the green, green hills of Piedmont. 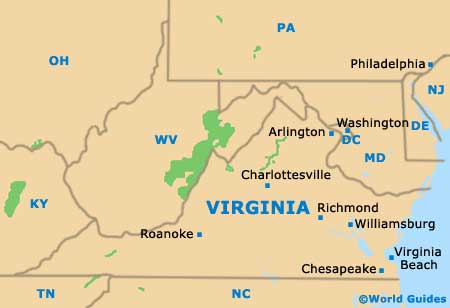