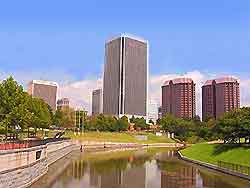 Richmond, capital of Virginia (VA) state, is a large independent city dating back to 1607. With many boulevards lined with trees, historic sites and an antebellum southern charm, Richmond is bisected by the James River, offering a scenic walking trail. Richmond is home to the 200-year-old Virginia State Capitol building, one of Richmond's most prominent landmarks, together with many other notable structures, such as the Tredagar Iron Works, which is now an important visitor center. Located in the center of Virginia, the city of Richmond is well placed for exploration and excursions.

Hotels in the city are widespread and can be found throughout downtown Richmond, around The Fan neighborhood along Monument Avenue, in Church Hill close to Shockoe Bottom, and on the both east and west sides of Richmond - close to the University of Richmond and a number of large corporations. Further hotels can be found nearby Richmond Airport (RIC), which stands to the southeast of the city. More information about Richmond Hotels. 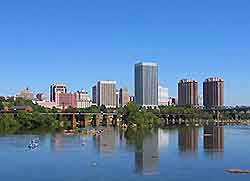 Tourism is actively promoted in the city of Richmond, with many outstanding tourist attractions worth a visit. Richmond's main tourist information center is the Richmond Visitors' Center on North 3rd Street, which is manned by friendly staff and offers a range of tourist advice, with comprehensive brochures, books, reservation services and tourism information about all of Richmond's main tourist attractions and popular excursions.

Richmond has plenty of popular tourist attractions, including Canal Walk - a particularly scenic walk along the Richmond waterfront, with historic information on brass plaques throughout the walk; Maymont House - the perfect family day out, with large gardens, a small zoo and a children's farm; Richmond's Monument Avenue - a national historic site with a series of statues of important Confederate heroes; and the City Hall Observation Deck - offering stunning panoramic views of Richmond's skyline. 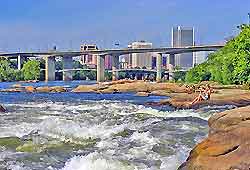 Other major tourist attractions in Richmond include the Virginia State Capitol - a magnificent, palatial late 18th-century building, visible from all over Richmond; the White House of the Confederacy - a neo-Classical mansion open to the public, once home of Confederate President Jefferson Davis; Richmond's Egyptian Building - an unusual landmark built in 1845, belonging to the Medical College of Virginia; Shockoe Slip - a renovated wharf area with good amenities and cobbled streets, located in the Shockoe Bottom district of Richmond; and many gardens and parklands, such as Capitol Square Park, James River Park, Lewis Ginter Botanical Gardens and Richmond National Battlefield Park. More information about Richmond Tourist Attractions and Richmond Landmarks.

Some of Richomnd's most popular museums and art galleries include the Science Museum of Virginia - containing a Space Gallery, the Ethyl IMAX Dome and a Planetarium; Richmond's Virginia House Museum - a 12th-century building originating from England; the Edgar Allan Poe Museum - standing in the oldest house in Richmond, with a host of memorabilia about this famous writer; the Richmond National Battlefield Civil War Visitor Center - exploring the Confederate and Civil War with historic information and exhibits; Museum of the Confederacy - featuring detailed information about aspects of the Civil War; the Virginia Museum of Fine Arts - Richmond's premier art museum, boasting a collection of world-class paintings; and the Visual Arts Center of Richmond - regularly hosting many changing exhibitions. More information about Richmond Museums and Richmond Art Galleries.

Tourist attractions located near to Richmond include Colonial Williamsburg - the former colonial capital with many lovingly restored buildings and cobbled streets; Fredericksburg - a quaint town full of character and tourist appeal, halfway between Richmond and Washington DC; Jamestown - the area where the first British colonists settled in 1607, with a number of archaeological excavations; Magnolia Grange - an impressive plantation home and gardens, just a short drive from Richmond in nearby Chesterfield; Yorktown - a historic area and part of the Historic Triangle, standing on the York River near to Richmond; and Tuckahoe Plantation - one of Virginia's oldest plantation homes, formerly the residence of Thomas Jefferson. More information about Richmond Attractions Nearby. 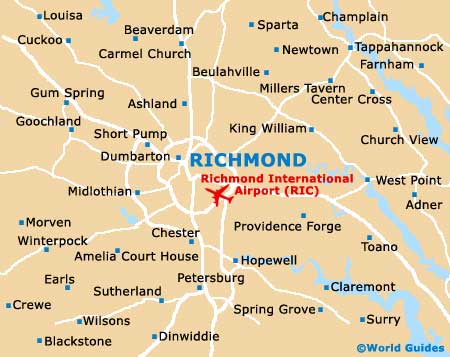