Vermont is tucked away in New England, one of the earliest English settlements in North America. The state was officially named after its Green Mountains, or 'Verts Monts', at the behest of the 18th-century American patriot Dr. Thomas Young. Vermont is the least densely populated state in the whole of the US and has the smallest state capital. In fact, none of Vermont's cities are particularly large.

It would be no exaggeration to say that Vermont is an all-year round tourist destination. In the autumn, visitors can stare in amazement at the multi-colored foliage of a New England fall at the approach of cold weather. When the snow arrives, Vermont is a popular haunt for winter sports enthusiasts. Killington Peak, Pico Peak and Mount Ellen all offer some great downhill ski slopes. In the summer, ski runs give way to hiking paths along the wild and wonderful Long Trail.

Vermont is also a gourmet's paradise. There are microbreweries almost everywhere - over 20 at the last count, with fine crafty beverages served up in Vermont's brewpubs. The restaurants here are renowned for serving great food. Vermont happens to be the leading US producer of that fine pancake accompaniment, maple syrup. The fact that Montpelier is the only US state capital to resist the lure of a McDonald's says a lot.

In August 2011, Vermont was struck by Hurricane Irene, leading to the worst deluge since 1927. During the catastrophe, severe flooding even washed away Vermont's emergency operations center. The resultant clean-up operation was a lengthy and expensive one. 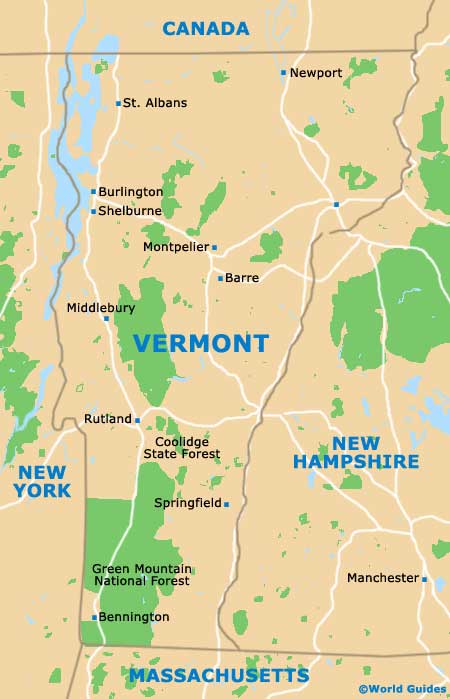