When it comes to land area, Rhode Island, or the State of Rhode Island and Providence Plantations as it is officially known, is the smallest state in the US. It takes less than an hour to drive from one side to the other. That said, it is also the second most densely populated US state. Many Rhode Islanders live in the state's two main cities - either Providence, with its lively nightlife and museums, or Newport, which has the feel of an olden days resort town.

Rhode Island is known as 'The Ocean State' for a very good geographical reason. It is not actually an island as such, but it does have a number of large bays and beaches that give it a distinctly seaside feel, making it especially popular in the summertime.

Local Rhode Islanders have always enjoyed something of a tradition when it comes to independence. As you would therefore expect, the state played quite a significant role in the American Revolutionary War. It was the first of the original 13 colonies to make an open enemy of its British rulers. It was also the first state to enact slavery prohibition legislation in 1652.

Seafood plays a big role in Rhode Island, as it does in many other parts of New England. A particular delicacy of the state is clam cake, a type of deep fried ball of dough that is stuffed with chopped clam. It can, of course, be washed down with the official state drink of coffee milk, which is basically milk mixed with a coffee syrup.

Over the years, Rhode Island has entertained many film crews who have come here to shoot such blockbusters as 'High Society' and 'The Great Gatsby', and more recently, 'Meet Joe Black' (1998) starring Brad Pitt and Anthony Hopkins. The state is also remembered as being the place where John F. Kennedy married his wife, Jacqueline Onassis. This famous political couple were wed in 1953 in the city of Newport, on Aquidneck Island. 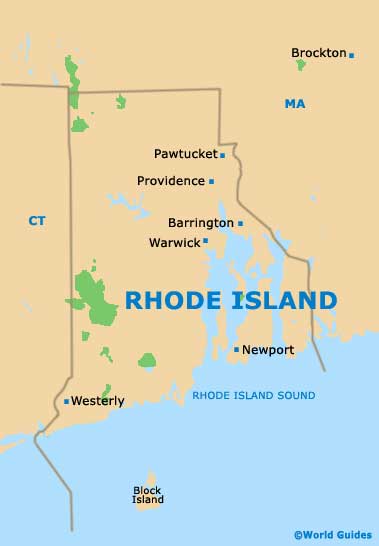