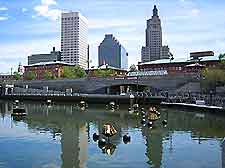 Providence is located in the state of Rhode island (RI) and has been the capital city since the beginning of the 20th century. With many cultural tourist attractions, the city is spread across seven hills and features two main rivers, the Providence River, which leads into the Seekonk River. This is the third-biggest city in New England and it has long prospered as an important port.

Nicknamed as the 'Renaissance City', Providence has clearly stepped up a gear in the area's renovation and is now home to a thriving downtown business district. The city has recently become known as one of the East's 'Best Places to Live', due to its revival and renovation. 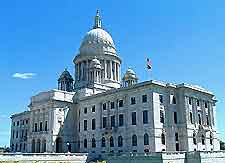 Being the capital of Rhode Island, it is hardly surprising that Providence embraces tourism and the city is home to a host of restaurants, shopping centers and hotels. The main tourist information centers are the Providence Warwick Convention and Visitors Bureau on West Exchange Street, and the Rhode Island Tourism Division on West Exchange Place. Home to a range of tourist information about what to see and where to go, other notable buildings nearby include the US Post Office on Exchange Terrace, and the Providence Public Library on Washington Street, which offers free Internet access. The local Phoenix and Journal newspapers are also excellent places to check for the latest tourist information, cultural events and things to do here.

Featuring many historic guesthouses and hotels, accommodation in Providence is widespread and is particularly clustered around the downtown district, with many hotels near to the Rhode Island Convention Center. Further hotels can be found around the Federal Hill district, Waterplace Park, the Brown University campus and the nearby T. F. Green State Airport (PVD), which lies to the south of central Providence. More information about Providence Hotels. 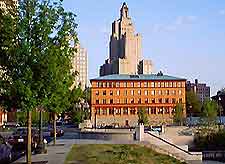 Providence features a range of tourist attractions, including Brown University - a National Historic Landmark in Providence, with a wealth of information on things to see and do; the First Baptist Church in America - a charming Georgian building with stunning architecture and furnishings; John Brown House - an 18th-century three-story Georgian building with a large collection of furnishings and art works; and the Trinity Repertory Company - an award-winning company providing quality drama, musical and comedy productions. More information about Providence Tourist Attractions.

Some of the best museums and art galleries in Providence include Governor Henry Lippit House Museum - an amazing New England mansion, with many elegant features; the Museum of Art, Rhode Island School of Design - with many fascinating exhibits including sculptures, drawings, photographs, prints, textiles and a collection of Impressionists; and the Museum of Rhode Island History at Aldrich House - featuring an impressive collection of furnishings and decor. More information about Providence Museums and Art Galleries.