It seems like so much of Nevada is dry and dusty desert. You head out on the highway and just keep on going. Then, bang slap in the middle of all that nothingness is the glitzy city that is Las Vegas.

Las Vegas is an unusual place in so many respects. It boasts more hotel rooms than anywhere else in the world. Each day, around 150 couples come here to get married, taking advantage of all that glamour and Nevada's more relaxed marriage license rules. The world-famous 'Las Vegas Strip' has been attracting celebrity singers and performers for decades. Its shows have become stage spectaculars and its casino lounges have kickstarted the careers of many a big name in the world of show business.

Interestingly, Nevada was the first US state to make gambling legal and it has become the country's gambling and entertainment capital. It is estimated that there are a staggering 200,000 slot machines in the state.

Whilst Las Vegas and that other Nevadan city of Reno are usually the first and only point of call for visitors to this state, there is another side to Nevada that's worth exploring. First-time visitors can't fail to be impressed by Lake Tahoe, with its crystal-clear waters, or the hundreds of mountains that rise up within the state's borders.

Nevada's natural resources don't just include some amazing scenery. Since those early gold rush days, prospectors have come here hoping to find their fortune. Virginia City was founded when the Comstock Lode (a significant discovery of silver ore) was uncovered. In the 1870s, it was home to several thousand people. Nowadays, it is little more than a ghost town in comparison.

In a state where the majority of land is managed by federal government, you would expect to find the odd prison and military establishment. One of them is Area 51, a military base that is rumored to house top-secret UFO research. It is so shrouded in mystery that the very existence of this unconventional airbase wasn't acknowledged until 2003. 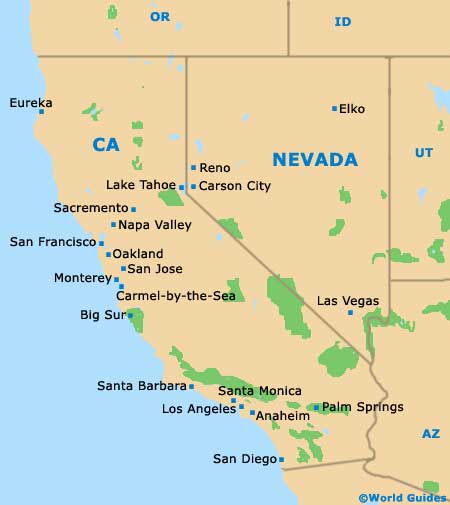