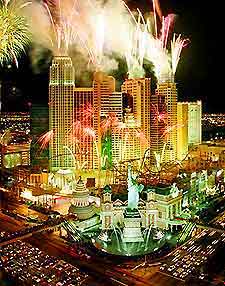 Viva Las Vegas! This famous Nevada city is home to bright neon lights, busy casinos, the famous Las Vegas Strip, enormous hotels, numerous wedding chapels, lively nightlife, an average of 315 days of sunshine each year and many impressive tourist attractions. Where else in the world can you get married without even leaving your car, or by a priest dressed as Elvis Presley?!

There is so much more to this city than just casinos and wedding chapels, and the Las Vegas Tourist Information Center on Paradise Road is a good place to come when you first arrive, being easy to reach and located next to the Convention Center Drive. Tourism is big business in the city, and with so much to choose from, often just minutes from your hotel, it is worth finding out exactly what is on offer, so that you don't miss out on anything.

Accommodation in Las Vegas is incredibly varied and many resorts are simply vast, replicating actual famous cities from around the world. Although there are an enormous number of hotels in Las Vegas, including nine of the ten largest hotels in the world, more than half a million tourists stay in this city every week and so accommodation gets booked up fast. Advance hotel reservations in this colorful city are not advisable, they are essential - Las Vegas Vacations have never been more popular, with the best prices tending to be midweek, when casino hotels on the Strip are at their cheapest. Downtown hotels are generally less expensive than Strip accommodation, although quite basic. There are also a huge number of motels to choose between, with prices being competitive.

The Las Vegas Strip is a wide avenue that runs through the center and is lined with most of the city's largest hotel casinos and tourist attractions. Some of the most popular include the Secret Garden and Dolphin Habitat - a tropical paradise with white tigers, elephants and dolphins; the Speed Roller Coaster at the Cyber Speedway - with speeds of up to 70 miles-per-hour, located on the northern side of the city and featuring a major racing circuit; and the Paris / Las Vegas Eiffel Tower - a half size replica of the famous Eiffel Tower at the themed Paris-Las Vegas casino, where it is actually possible to get married at the very top, whilst enjoying spectacular views across this gambling capital. The incredible Hoover Dam is also located close to the city and is often described as one of the 'Seven Wonders of the World'. More information about Las Vegas Tourist Attractions. 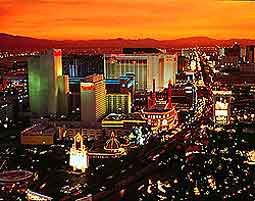 Everything in America is big, but in 'Sin City', everything is huge, including the Las Vegas Strip hotels and resorts, the shopping malls and the legendary casinos, which in many cases are simply vast. Some of the city's casinos have literally thousands of slot machines and many hundreds of card tables. Several of the buildings now hold truly impressive world records, such as the Stratosphere Tower at Las Vegas Boulevard South, which is home to the word's highest roller coaster and also America's fastest elevator, and the Castaways Hotel and Bowling Center, where the largest tenpin bowling alley in the world is located, boasting some 106 bowling lanes.

There are also many excellent museums in Las Vegas, suiting those looking for a spot of culture, away from the gaming tables. Some of these include King Tut's Tomb and Museum - featuring a reproduction of the famous tomb of Egyptian King Tutankhamen; the Elvis Museum - crammed full of Elvis Presley information and memorabilia, and situated just off the Strip; and numerous excellent art galleries as well, on streets such as the Spring Mountain Road and the West Sahara Avenue.

Las Vegas has been immortalized in many Hollywood films, such Elvis Presley's 'Viva Las Vegas' (1964), Sean Connery's 'Overcoming all Odds' (1971) and Nicholas Cage's 'Honeymoon in Vegas' (1992). There are few cities in the world that can compete with its almost legendary restaurants and top cuisine, shopping facilities and the simply awesome entertainment opportunities. Las Vegas is said to have produced more instant millionaires than any other city and is definitely worth visiting, and need not be as brash and commercial as you might first expect.