The US state of Nebraska is the sort of place where you half expect to spy a cowboy riding over the horizon, lasso in hand. It is a land of grazing cattle and open prairie, and many years ago, Buffalo Bill used to hold rodeos here. Stagecoaches no doubt flew past, kicking up the dirt behind them.

Nebraska might be classed as a Midwest state nowadays, but in days gone by it was very much at the vanguard of the rush to find fame and fortune in the gold mines of the West. The state is crisscrossed by enigmatic reminders of its past, including the Pony Express and the Oregon Trail, with its distinctive Chimney Rock. The first few pioneer families to be given land by President Abraham Lincoln used it to set up their own farms in Nebraska. The first Pacific Railroad was given land here too.

This is still very much a rural state today, although it is now better known for its corn than for its cowboys. Its official nickname is 'The Cornhusker State', thought to refer to the state's favorite agricultural product, since Nebraska's hot, wet summers are perfect for crop growing. The nickname may also be associated with the football team of the University of Nebraska, known as the Cornhuskers.

Nebraska is, incidentally, the state that brought Kool-Aid to the shops of America. Amateur chemist Edwin E. Perkins of Hastings invented this iconic American soft drink powder way back in 1927. Today, one half of the city's local museum is dedicated to Perkins' invention. 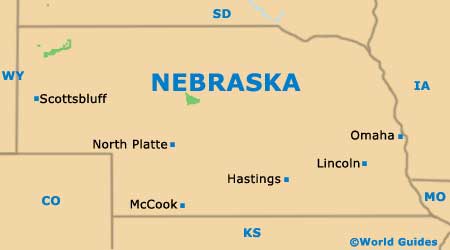