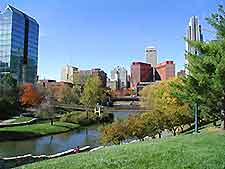 Situated alongside the picturesque Missouri River, Omaha lies on the very eastern side of Nebraska (NE), bordering Iowa and close to Missouri to the south. Omaha is a prosperous city with an array of tourist attractions and Omaha is known for its superb zoo, numerous museums, vibrant entertainment venues and traditional steakhouses. The city of Omaha is steeped in history and character, especially in Omaha's downtown district, which features cobbled streets and renovated warehouses in the Old Market area.

Much of Omaha's wealth is a direct result of the city's thriving cattle industry and until recently there were many vast stockyards on the southern side of Omaha. Known for its high concentration of millionaires, Omaha originally started life as a prairie outpost. 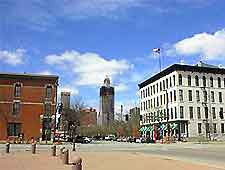 Tourism is encouraged in Nebraska's largest city and embraced by locals in the Omaha area. The main tourist information outlets in the Omaha area are the Omaha Visitors Center along Mercy Road and the Nebraska I-80 Information Center on Bob Gibson Boulevard. With helpful travel and tourism advice, together with information about Omaha's many hotels, restaurants and tourist attractions, other notable buildings nearby include the W. Dale Clark Library on 15th Street, which offers free Internet access.

Concentrated around the city center, hotels in Omaha are available at all levels and include many reasonably priced hotels and chain motels, often with views of the Missouri River. Some of the most popular hotels in Omaha can be found around the University of Nebraska, Elmwood Park, Freedom Park, South Omaha sports stadiums and Eppley Airfield (OMA), which stands on the northeastern side of Omaha. More information about Omaha Hotels. 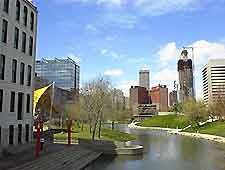 Omaha has an assortment of tourist attractions, including Heartland of America Park - offering a wealth of exciting attractions at this vast park, including boat rides and concerts; Omaha's Henry Doorly Zoo - a popular Omaha attraction featuring over 4,000 animals from all over the world, with educational information; Mormon Pioneer Cemetery - the resting place of many Mormon pioneers who lost their lives in the harsh winter of 1846; Old Market - the perfect place for shopping in Omaha, with numerous boutiques, craft shops and charming restaurants; Orpheum Theater - offering a wealth of spectacular theatrical performances; and the Strategic Air and Space Museum - close to Omaha, paying tribute to Nebraska's Strategic Air Command, with a wealth of exhibits and over 30 aircraft. More information about Omaha Tourist Attractions.