Montana has quite a few nicknames, including 'The Treasure State'. They all seem to sum up the place pretty well. Montana is full of natural treasures, from its many big rivers and big mountains, to its acres of untamed wilderness.

Another of the state's nicknames is the 'Big Sky Country'. All you have to do is look skyward and you will get a good idea of the sheer size and openness of the place. So, whilst lots of people come here to see the sights, you never really get the sense that you are one of a crowd. Many visitors feel as much of an explorer as Montana's earliest settlers did.

This is the sort of place that makes you want to step astride your Harley and head out on the highway. You'd do well to head to the Sun Road, a scenic highway that takes drivers over Montana's Logan Pass and within camera-pointing distance of the Jackson Glacier.

Montana's wild scenery hasn't always been a playground for folk out to enjoy a holiday away from it all. Back in the days when American pioneers were busy heading west, it was the site of many a conflict with the Native American tribes they encountered along the way. These conflicts grew more heated with the discovery of gold in 1863, near Bannack.

Tourism arrived in earnest in the late 19th century, with the entry of Montana into the Union as the 41st state. Today, millions of visitors come here to see such attractions as the Yellowstone National Park and the Bighorn Battlefield National Monument, the latter of which serves as a memorial to those who took part in the conflict of 1876. 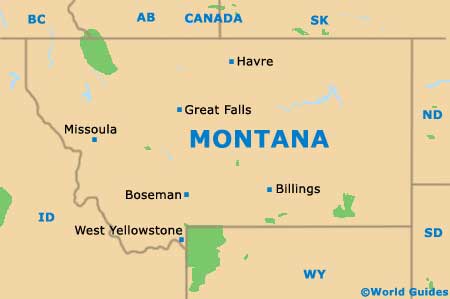