Mississippi offers a real taste of authentic Southern life. It is mostly rural and, in some ways, can be said to offer little in the way of urban attractions. The state is dominated by the river that runs through it. Flooding is part and parcel of the seasons here. The Mississippi is the third-longest river in North America and, despite vast levee-building schemes and modern-day scientific knowledge, little has been achieved when it comes to trying to tame 'Old Man River'.

Take a drive through Mississippi today and you will see that cotton is king. In fact, the state's producers cultivate over a million acres of cotton plants each year. Mississippi's cotton history dates back to the 1850s, a time when members of the state's planter aristocracy did very well for themselves, helped along by thousands of slaves. The state played a key role in the American Revolution - it was the first to declare its break from the Union and was a founding member of the Confederate States of America.

Mississippi's musical links include being the birthplace of the Blues. Such bluesmen as Muddy Waters and B.B. King followed hot on the heels of those original musicians, who based their music on haunting slave songs and chants.

Mississippi also happens to be the birthplace of the King of Rock and Roll. Elvis Presley started out life here in this state in the year 1935, in a tiny two-room house at East Tupelo. In 1948, the Presley family moved to Memphis, which turned out to be a stroke of luck for Elvis, who had musical ambitions. Elvis didn't forget his birth town though, financing many local town projects during his lifetime. 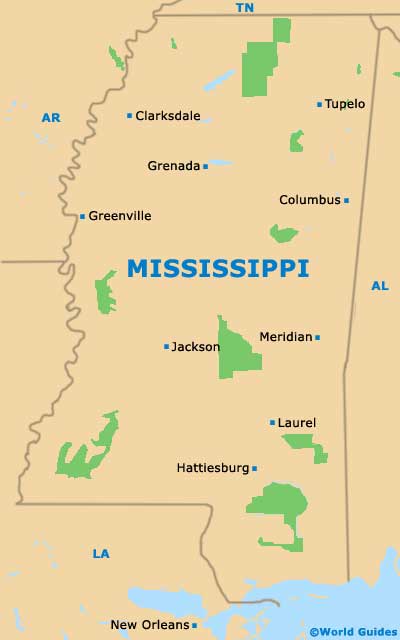