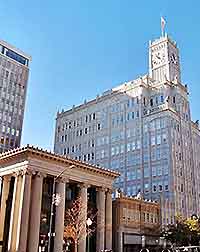 Located in south central Mississippi, Jackson is the state capital and was previously named 'LeFleur's Bluff'. The city is home to a number of notable historic landmarks, namely the city hall, the old state capitol building and the governor's mansion. The largest city in Mississippi, Jackson contains many spreading suburbs and is a wealthy city, with many thriving industries, including health and technology based companies. Jackson is popular with tourists, due to its locations, which is ideal for exploring the southern half of Mississippi and is also within driving distance of Memphis, Tennessee.

Tourism is encouraged and many of the city's sights are widely promoted. The main tourist information center in Jackson is situated along East Capitol Street and is open Monday through Friday, with a further tourist desk being available at the Agriculture and Forestry Museum on Lakeside Drive. 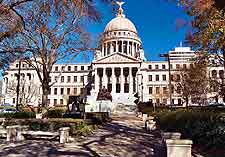 Featuring an extensive selection of accommodation, local hotels suit all budgets, ranging from chain motels in the Fairground area, to historic hotels in the heart of the city. A number of Jackson's hotels are centered around the downtown district, with many additional hotels close to Millsaps College campus, Jackson State University, and in nearby Ridgeland and Northpark Mall. More information about Jackson Hotels.

Jackson has countless impressive tourist attractions worth a visit, including Eudora Welty House and Garden - a Tudor-style house with a beautiful garden; Jackson Zoological Park - boasting a spectacular collection of animals from around the world, together with educational information and a children's adventure world; LeFleur's Bluff State Park - offering many outdoor activities including hiking, fishing, golfing, swimming, boating and tennis; and the Mississippi State Capitol - with a wealth of history and including tours of this stunning building. More information about Jackson Tourist Attractions.