Take a quick look at any map and you will soon see that Michigan is quite unlike any other US state. It is, in fact, the only one to be made up of two parts - a Lower Peninsula, known popularly as 'The Mitten' because of its odd shape, and a tourist-friendly region known as the Upper Peninsula. These two peninsulas are connected by the Mackinac Bridge, or 'Mighty Mac', a bridge which is truly vast in its proportions and said to be the third-longest suspension bridge in the world.

The state's location in the Great Lakes region means that it is in prime position as far as impressive scenery goes. Surrounded by lakes Erie, Huron, Michigan and Superior, and with a plethora of inland ponds and lakes, you can never be far from water. That's why Michigan in the summertime is all about lounging on the shore, playing in the sand, or simply enjoying the cool lake water.

By way of contrast, Michigan is also home to Detroit, an expansive city that dispenses urban grit in bucketloads. Michigan's cities grew up at the turn of the 20th century with the launch of the automotive industry. The Ford Motor Company was founded in Detroit by one Henry Ford in 1903, making it the car capital of the world. It is still controlled by the Ford family today. Less well-known is Michigan's claim to be cereal capital of the world, thanks to the establishment of the Kellogg Company here. Based in Battle Creek, the company has been producing those ever-popular flaked cereal products since 1906 and is still going strong.

We also have Michigan to thank for that inimitable Motown Sound, which became one of the most influential music trends in the 1960s. The Motown Sound is easily recognizable by its mix of soul and pop influences. During its Detroit days, this iconic record label produced such artists as Diana Ross and the Supremes, the Jackson 5 and Marvin Gaye. 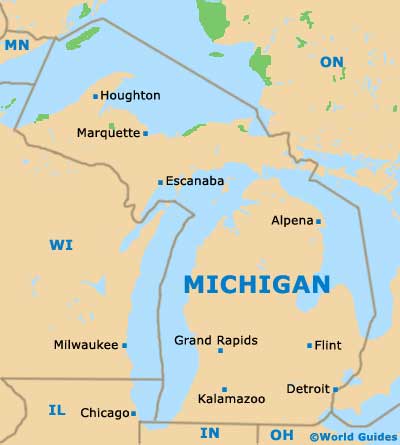