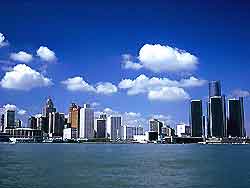 Separated from Canada by the scenic Detroit River, the city of Detroit resides within the state of Michigan, where it is known throughout the world as the home of the car industry. Detroit is often referred to as simply the 'Motor City' and amongst the city's many popular tourist attractions is the Henry Ford Museum and a number of classic car collections, although there is so much more to this city than simply motor cars.

The city's skyline is dominated by a number of modern towers, including the spectacular Renaissance Center and those of Hart Plaza. Over recent years, Detroit has seen a resurgence in popularity and much of the city has now been renovated and restored, with a good selection of hotels and accommodation.

Hotels in Detroit are particularly concentrated around Bricktown, the Cultural Center Historic District, Eastern Market, Greektown, Rivertown / Civic Center and the Theater District. Detroit contains all levels of accommodation, ranging from budget motels to the most luxurious, swanky hotels. Campers will find that the Pontiac Lake Recreational Area in Waterford is the nearest state park with facilities for camping. More information about Detroit Hotels.

Located on West Fort Street, in between Shelby Street and the Washington Boulevard, is the helpful Detroit Convention and Visitors Bureau, which provides a selection of tourist information on weekdays. The Hart Plaza is just a short stroll away from this tourism outlet, as is the Cobo Center on Washington Boulevard (south) and the Opera House on Broadway Street (northeast). Grand Circus Park lies directly to the north, while to the east are the pleasant districts of Greektown and Rivertown. 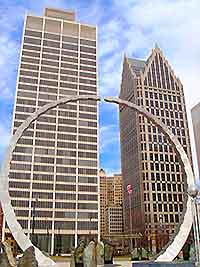 This Michigan city has many world-class tourist attractions, including the Detroit Public Library - worth a visit for its extensive Burton Historical Collection; the city's Science Center - state-of-the-art entertainment combined with high-tech gadgets and an IMAX theater; the Eastern Market - a vast, covered farmers' market held every Saturday; Detroit Zoo - one of the country's best zoological gardens, using natural barriers and landscaped habitats; the Belle Isle - actually designed by the creator of Central Park in New York, containing the Belle Isle Aquarium and the Belle Isle Zoo; the Cranbrook Gardens - surrounding the Cranbrook Mansion, featuring colorful flower beds and an Oriental garden; and the Renaissance Center - arguably the city's most eye-catching landmark, comprising the General Motors world headquarters, numerous shops, cinemas and restaurants.

Other popular attractions in Detroit include the David Whitney House - a wonderful example of Romanesque Revival architecture, housing a popular restaurant; the Fischer Building - an Art Deco building containing stunning marble mosaics; the Fox Theater Building - a ten-story, steel-framed construction with an auditorium seating more than 5,000 people; the Hart Plaza - hosting many of the city's largest festivals, such as the world-famous Ford Montreux Jazz Festival; and the Wayne County Building - the oldest intact Italian Renaissance edifice in Detroit, standing next to chic boutiques, top night spots and many fashionable restaurants. More information about Detroit Tourist Attractions and Detroit Landmarks. 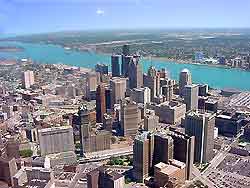 The city also contains many reliable cultural offerings, such as the African American History Museum - the world's largest African museum; the Children's Museum - a superb family museum containing a Planetarium; the Cranbrook Institute of Science - with numerous arts and science information; the Detroit Historical Museum - celebrating many interesting aspects of the city's rich history; the Greystone International Hall of Fame / Jazz Museum - showcasing the city's history and jazz legacy; the Motown Historical Museum - celebrating the heritage of Motown music; and the Detroit Institute of Arts - the fifth-largest museum in the USA, housing more than 65,000 artworks. More information about Detroit Museums and Detroit Art Galleries.

Tourist attractions located close to Detroit include the Ann Arbor - to the west of the downtown district, filled with cultural and historical attractions; the Automotive Hall of Fame - overflowing with history, educational information and transportation memorabilia, together with state-of-the-art interactive attractions; the Henry Ford Estate - in nearby Dearborn, a huge 56-room mansion once the family home of Henry Ford; and the Henry Ford Museum and Greenfield Village - really very close to Detroit and ranking amongst the region's most prestigious attractions, showcasing many historic airplanes, automobiles, homes and Thomas Edison's laboratory. More information about Attractions Nearby Detroit. 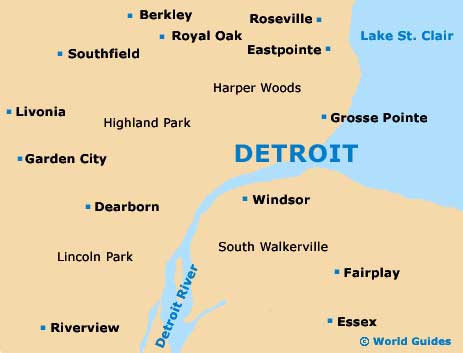