Deep in the American Heartland is Iowa. To the east is the Mississippi River, while to the west is the Big Sioux River and the Missouri River. In between is a vast area of rolling fertile prairie, making this one of the top farming states in the country. That's a very good reason why Iowa is known as the 'food capital of the world'. Every year, the World Food Prize is awarded in Des Moines, Iowa, to outstanding individuals who have made a difference to people's lives through improving the quality, quantity or availability of food.

Back in the days of pioneering traders from Europe, Iowa was part of a land known as Louisiana. In 1800, it was held by the French emperor Napoleon Bonaparte. In 1803, however, it came under US control, finally joining the Union in 1846. Iowa acquired the popular nickname of 'The Hawkeye State' reputedly following the publication of Fenimore Cooper's 'The Last of the Mohicans', a book which featured a scout known as Hawkeye. The name was taken up by two enterprising Iowans and was eventually made official.

Iowa has been rated as one of the safest US states to live in. Nonetheless, the state has seen many changes and challenges. In the 1980s, a trend started that eventually led to the swallowing up of many of the smaller farms into bigger agricultural concerns. Today, more Iowans live in towns and cities, such as Polk and Scott, than in the countryside. 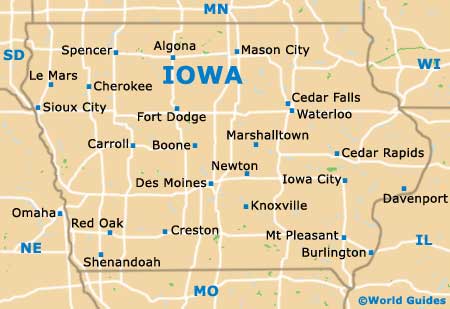