The District of Columbia is perhaps better known as Washington DC. Officially the capital district of the US, it is unusual in that it isn't actually part of any US state. Washington DC perches on the eastern Pacific seaboard, with both Maryland and Virginia as its neighbors.

The capital district was approved in 1790, with the City of Washington being founded a year later. The district was granted limited self-government in 1973, since which time it is been governed by an elected mayor and a city council. That said, Congress still has the final word here.

Washington DC wasn't the creation of centuries of random urban development. It was built to a plan that was the brainchild of the District's namesake George Washington, who served as the president in the late 18th century. Open parks, low-rise buildings and broad vistas were the order of the day, along with splendid monuments that were thought fit to grace a capital district.

The eyes of the world have been on Washington DC following several history changing incidents in modern times. In 1968, riots broke out in the streets of Washington DC after the assassination of Dr. Martin Luther King, Jr. They were to last for three days.

Today, almost one-fifth of this cosmopolitan city is covered with parkland, surely making it one of the leafiest cities in the US. Its strict planning laws mean that Washington DC is unlike other major US cities, in that it is not dominated by skyscrapers. This is rated as the second-most visited city in the US and is home to many foreign diplomats, lending it an international feel. It is also home to six of America's top ten buildings, including of course, the White House, which is the official residence of the US president.

Map of the District of Columbia DC 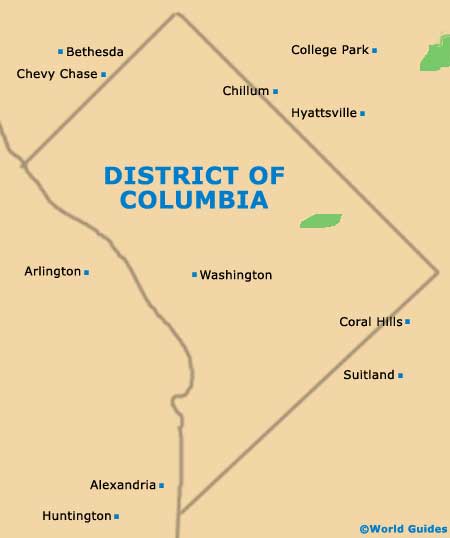