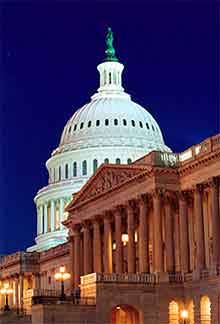 Washington DC is situated close to Virginia and Maryland, and is one of America's most beautiful cities, full of monuments, memorials, impressive architecture and large public parks, and is the home of the president. Throughout the year, Washington DC has many exciting festivals, parades and sporting events, and one of the city's most famous sports teams are the Washington Redskins, who play premier-league American football and have won the prestigious Superbowl several times.

This powerful city is the capital of the USA and best known for being home to the White House, a palatial mansion with a distinct whitewashed facade, completed in 1800 and the official state residence of every US president except George Washington. For further information about the White House and possible guided tours, head to the Visitors Center on Pennsylvania Avenue Northwest, while for general tourism, there are a number of different tourist information centers to consider. The most notable include the Chamber of Commerce Visitors Center in the Ronald Reagan Building on Pennsylvania Avenue Northwest. and the Washington Convention and Visitors Association on New York Avenue Northwest.

Accommodation in this capital city can be a little on the expensive side, but there are certainly a large number of hotels to choose between, while for budget travelers and backpackers, hostels are generally the most practical, most sensible and cheapest choice available. This is very much a city of politics and business, with the business week being a busy time. Therefore, city hotels are known to slash their rates at weekends and also during the quietest periods of the summer season. The main tourist season in Washington DC runs roughly from April to September, and the business season tends to start slightly earlier and finish in the fall, virtually disappearing during the height of summer. One of the best ways to find out more about the city and what it has to offer is by joining a Washington DC tours trolley, where you are transported around the main sights whilst enjoying insightful commentary along the way.

Washington DC has many world-famous tourist attractions and major landmarks, and these include the Federal Bureau of Investigation (FBI) offices - situated in the downtown district, using state-of-the-art crime-solving technology; the Library of Congress - the national library of America, actually the world's largest library, with more than 100 million items; the National Zoological Park - most famous for its two giant pandas, Mei Xiang and Tian Tian; and the Verizon Center (formerly MCI Center) - a huge arena hosting many concerts and annual sporting events to audiences of some 20,000 spectators, opened in 1997 at a cost of around USD 200 million. More information about Washington Tourist Attractions and Washington Landmarks. 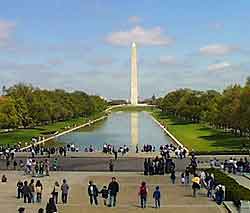 There are a large number of museums within America's capital, many of which are free, providing a wide range of interesting information about the history of this epic city, such as the National Museum of American History - with unusual items of memorabilia that reflect aspects of American culture over the years, including Judy Garland's ruby slippers from the Wizard of Oz movie; the National Archives Museum - housing some of America's most important documents, such as the legendary US Constitution and Declaration of Independence; and the impressive National Air and Science Museum, which is one of the USA's most popular. Washington DC also has many top art galleries, including the National Gallery of Art, the Smithsonian American Art Museum, the Freer Gallery of Art, and the Phillips Collection, to name but a few.

There are a number of main districts and neighborhoods in this powerful city and the US Capitol is the point used to divide Washington DC into four quadrant areas. Foggy Bottom, a particularly historic and characterful area, is situated to the west and northwest of the White House and is home to a number of large government offices and expensive apartments. Downtown Washington, the largest area of the city, is located to the north and east of the White House, with numerous shops, department stores, theaters, tourist attractions, museums, restaurants, office blocks and many iconic buildings.

Penn Quarter, on the opposite side of Pennsylvania Avenue, has underdone much redevelopment, including two large movie theaters and many trendy restaurants. Judiciary Square Area, the central area east of Sixth Street, has long been the center of Washington's judiciary and local government for many years. 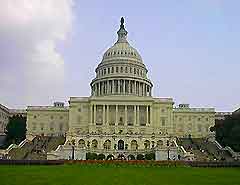 Dupont Circle, the most lively and cosmopolitan district in Washington DC, is also home to a significant gay community, with many excellent clubs and bars. Adams Morgan, situated one block east of Dupont Circle, is best known for its excellent ethnic restaurants and diverse community. Shaw, a large square bordered by North Capitol Street and 16th Street on the east and west, has a number of important neighborhoods. Mount Pleasant and North Washington are attractive areas, being lined with many trees and modest homes.

Georgetown, originally laid out in 1751 as part of Maryland, was not actually considered to be a part of Washington DC until 1871. Upper Northwest Washington, situated west of Connecticut Avenue and north of the Georgetown and Dupont Circle, includes streets such as Foxhall Road, upper Wisconsin Avenue and Massachusetts Avenue. Capitol Hill, a quiet and relaxed city district, overlays two quadrants, Southeast and Northeast Washington, and includes Union Station and the Eastern Market area. Anacostia, located across from the Anacostia River is home to many middle-class neighborhoods of detached homes, mature trees and rolling hills.