Connecticut is a fairly small state in the northeastern region of the US better known as New England. It is neatly sandwiched in between Rhode Island, Massachusetts and New York State, with the river after which it is named running through the middle. Connecticut is very much a land of contrasts. On the one hand, it is home to a fair few large industrial cities. On the other, there are plenty of rural areas and small towns too.

The first Europeans to colonize Connecticut were Dutch traders, who set up a fort on the current-day site of Hartford. By the 17th century, Connecticut had become an English crown colony, one of several to eventually rise up against English rule. Connecticut, which is also known as the Constitution State, became part of the Union in 1788.

Connecticut is home to one of America's best-regarded universities, Yale University, which was founded here in 1701. Less well known is the fact that the country's first law school was set up in Connecticut, and that the oldest public library in the US can also be found here.

Famous people who have a Connecticut connection are many and varied. George W. Bush, president of the US from 2001 to 2009, was born here, in New Haven. Renowned 19th-century author Mark Twain, of Huckleberry Finn fame, also had strong ties with this state, living in Hartford and later dying in Redding. 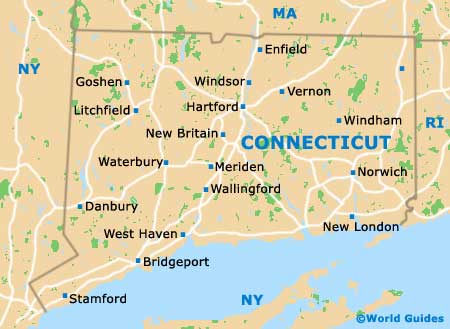