Arkansas is known as the 'Natural State' for good reason. Apart from an abundance of natural gems, this relatively unspoiled area of the southern US is home to a myriad of natural wonders, including the Ozark Mountains, more familiarly known as the Ozarks, as well as the Ouachita Mountains. State parks, vast forests, crystal clear lakes and beautiful valleys also account for why Arkansas is a big draw for outdoor types, keen fishermen and, in fact, anyone wanting to get away from it all.

The state's name has had many different spellings over the years, including Acansa, Akansea and Arkansaw. It is thought to derive from the French pronunciation of the original Quapaw words for the area, as named by early colonists. When Arkansas became a US state in June 1836, there was some initial controversy about the spelling. It was eventually decided to spell the new state 'Arkansas', but pronounce it 'Ar-kan-saw'.

Think of Arkansas and you can't help but think of hillbillies. This enduring stereotype, used to describe backcountry folk who have a penchant for hunting rifles, moonshine and a rustic way of life, has its roots in the 19th century.

In more recent years, this US state shot to fame as the home of Bill Clinton, who was born in Hope, Arkansas, and served as president of the US from 1993 to 2001. 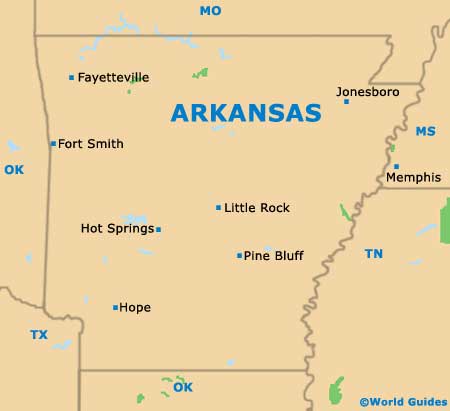