Arizona is situated in the southwestern part of the USA, sharing its longest border with neighboring Mexico. It is very much a land of contrasts, with diverse landscapes that feature some rather spectacular scenery.

The five distinct regions of Arizona include everything from southern deserts to northern mountains and pine forests. It is also home to dozens of national parks, the best-known being the Grand Canyon, a steep-sided gorge created over the centuries by the Colorado River.

The first Europeans to explore the area were Spanish. During the early 19th century, Arizona became part of Nueva California. It wasn't admitted to the Union until 1912, which was relatively late in the state's history. Arizona suffered at the hands of the Great Depression in the 1920s and 1930s. During this time, however, an alternative and highly lucrative tourist trade grew up around its Wild West heritage.

Arizona still has a 'frontier' feel. It is a land of cowboys, ghostly gold and silver mining towns, and dusty deserts. In the wintertime, Arizona is also a popular destination for ski enthusiasts.

Today, Arizona is still home to many Native American communities. The best known include the Navajo Nation and the Apache tribe. Well-known Arizonians include the labor leader and civil rights activist Cesar Estrada Chavez, as well as film director Steven Spielberg. 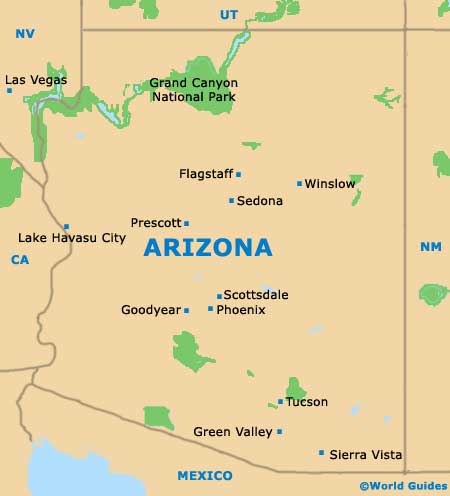