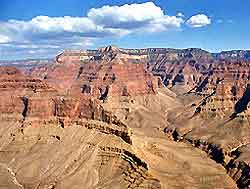 The vast Grand Canyon is without doubt America's most breathtaking natural attraction and has long been a major American tourist destination. Located in Arizona AZ, the Grand Canyon was formed by the Colorado River, and its shear size is beyond belief. At over 1 mile / 1.6 km deep and in places almost 20 miles / 32 km wide, the scale of the Grand Canyon is hard to comprehend, even when you get here.

Each year the region's tourism industry attracts more than five million visitors to the National Park and the Grand Canyon Village. Many tourists choose to visit the South Rim area, where hiking and whitewater rapids are a popular recreational activity.

Hotels in the Grand Canyon National Park are often filled to capacity and camping has become a popular alternative. Many inexpensive camping grounds are situated around the region, particularly in the South Rim area. A good selection of hotels can be found around the Grand Canyon Boulevard, the village area, along the State Highway US-64 and also in the neighboring towns of Flagstaff and Williams. Do bear in mind that hotels with the best views of the Grand Canyon, such as the famous El Tovar Hotel on the West Rim Drive, may be booked up more than a year ahead, and so advance reservations are often necessary if you are planning a vacation to remember. More information about Grand Canyon Hotels. 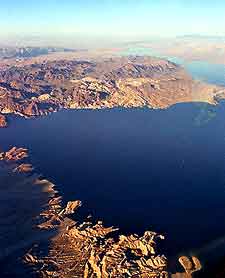 Tourism has become an important part of life in the Grand Canyon area, and the Canyon View Tourist Information Plaza, on the northeastern side of the village area, serves as the main visitors center. Also of note is the North Rim Visitors Center next to the Grand Canyon Lodge, and the Backcountry Information Center close to the North Rim campground.

The Grand Canyon features many excellent tourist attractions, including Helicopter Tours - lasting over one hour and traveling below the canyon's rim, over the Hoover Dam and often above the nearby Las Vegas Strip; the Grand Canyon National Park - following the mighty Colorado River from Marbles Canyon; Bright Angel Point - a short, scenic and precarious trail, offering some of the best rim views, used by both hikers and mules; the IMAX Theater - a six-story cinema screen, situated in Tusayan; and the Cape Royal - the North Rim's most southerly viewing point, with an interesting looping trail. 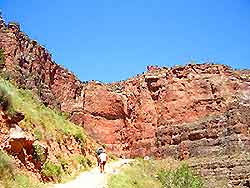 Other tourist attractions in the Grand Canyon include El Tovar Hotel - dating back to 1905, once one of the most elegant hotels to the west of the Mississippi River; Mather Point - generally the first major viewpoint and also the South Rim Trail's starting point; the Powell Memorial - commemorating the first man to paddle down the Colorado River's rapids in 1869; the Hualapai Indian Reservation - south of the Colorado River with flat plains and wooded plateaus; the Havasupai Indian Reservation - standing on one of the region's largest tributaries; the Vermilion Cliffs - to the northeast of the South Rim; and the Trailview Overlook - offering some of the most dramatic views in the Grand Canyon National Park, including Bright Angel Creek, the winding Plateau Point and Bright Angel trails. More information about Grand Canyon Tourist Attractions and Grand Canyon Landmarks.

The Grand Canyon also contains a number of somewhat unexpected attractions. These include the Desert View and the Watchtower - a period trading post, now home to a small museum and information center; Kolbs' Photography Studio - dating back to 1904 and once a thriving photographic studio; the Lookout Studio - another historic photographic studio, with superb views of the South Rim; and the Tusayan Ruin and Museum - a major archaeological site with remains of 800-year-old Native American rock dwellings and related artefacts, situated to the east of Moran Point. More information about Grand Canyon Museums.

Tourist attractions situated nearby include the Havasu Canyon and Grand Canyon West - a popular alternative to the much-visited North Rim and South Rim; the Grand Canyon Deer Farm - with many family attractions and animals, including a children's petting zoo; the Pipe Spring National Monument - situated in a Kaibab Indian Reservation, close to Fredonia and to the north of the North Rim; the Meteor Crater - an enormous crater where a meteorite landed around 50,000 years ago, two hours southeast of the Grand Canyon Village; and Point Sublime - known for its excellent camping spots and incredible sunrises. More information about Grand Canyon Attractions Nearby. 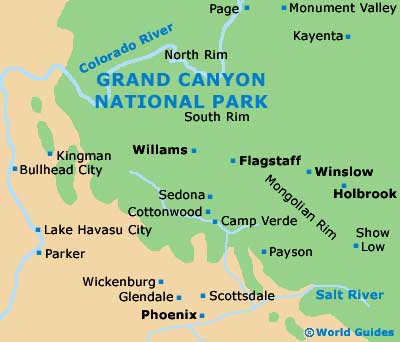