Nova Scotia is Latin for New Scotland and there are some real similarities between the old country and the new. For a start, there are islands and highlands. There's also more than a quick nod to tartan cloth in Nova Scotia's shops. Head along the Ceilidh Trail and you are more than likely to catch a fiddle tune or two - and maybe even a square dance. Over a quarter of the people who live in this province today have Scottish ancestry.

There are also some differences. Mixed in with all that Scottish heritage (the province started off as a piece of land given to a Scottish lord in the 17th century) are French, native and African influences from the many immigrants who have landed in this far-flung corner of North America over the years.

Most notably, Nova Scotia is one of the Canadian Maritimes. That means you can stand at any point in the province and you are never that far from the Atlantic Ocean. Nor are you too far from some breathtaking scenery. Understandably, the outdoors plays a big role in the province.

Plenty of people come to Nova Scotia for their summer holidays, drawn by the prospect of whale watching around Cape Breton or paddling a kayak around the remote islands and hidden coves of the province. The Cabot Trail is one of Nova Scotia's great hiking trails. It winds its way through the Cape Breton Highlands National Park, every now and then throwing up a spectacular ocean panorama.

Nova Scotian winters are a cooler affair. When the temperatures start to drop, it is a good time to retire to the province's largest city, Halifax. This waterfront community is a lively spot, with a youthful student population, and a host of busy bars and buzzing nightclubs. Halifax also plays host to several festivals, including the Royal Nova Scotia International Tattoo, held here since the late 1970s. 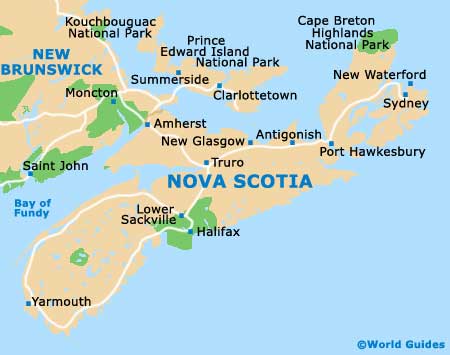