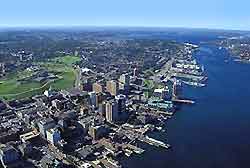 The capital city of Nova Scotia (NS), Halifax is famous for its enormous natural harbor, which is one of the largest and best of its kind in the whole world. Halifax was founded in 1749 and over the years, the Halifax Harbor has brought considerable wealth to the city, particularly during the 20th century.

Life in Halifax is generally relaxed, and whilst the center is busy, it is fairly compact and well structured. Halifax is a relatively hilly area, located on a peninsula, which is edged by both the harbor and the North West Arm inlet, with a number of seaside resorts and towns nearby.

Accommodation in the Halifax area is in good supply, although the most popular hotels often become fully booked during the busiest times. For last minute bookings, head to the Halifax International Visitor Center, where the helpful staff will do their best to find you a room. Hotels in downtown Halifax are amongst the most popular, together with many chain motels in the city's suburbs on the Bedford Highway and around the Bedford Basin bay. Also, a number of hotels can be found in nearby Dartmouth, and close to the Halifax International Airport, which stands to the northeast. More information about Halifax Hotels. 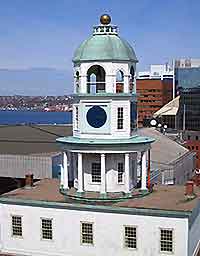 The tourism industry in Halifax has never been healthier and tourists visiting the area will find that they are well catered for. The main tourist information centers in the city are Tourism Nova Scotia on Lower Water Street, the Tourism Halifax International Visitor Center along Sackville Street, and the Red Store Visitor Information Center on Upper Water Street, all of which offer a range of tourist advice, travel tips and pamphlets about the area.

Divided into a number of distinct regions, notable districts and neighborhoods in the Halifax area include the Downtown District - the true heart of city life, extending along Lower Water Street up to the Citadel area; the Harbor area - based around the vast harbor, which is famous throughout Canada; South End - an exclusive part of Halifax, home to the spreading Point Pleasant Park; and West End - best known for containing both the Halifax Shopping Center and the West End Mall. Also worth a visit, Bedford stands on the northern side of the city and offers a mixture of residential areas, shopping malls, hotels and restaurants, and nearby Dartmouth is a similar city located across from the harbor, often known as Halifax's 'twin'. 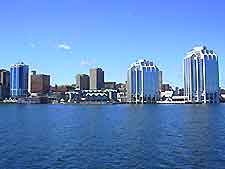 Halifax's main tourist attractions include the Halifax Citadel National Historic Site - an eye-catching white clock tower which has become one of the most famous landmarks in Halifax; the Discovery Center - a popular tourist attraction for all the family, with a range of scientific exhibits and interactive displays; Halifax Metro Center - a large sports stadium hosting a number of major sporting events and concerts; Murphy's on the Water - offering a range of cruise packages, include whale watching and fishing trips; and HMCS Sackville - a navy ship used in the second world war, now housing a museum and gift shop.

Notable landmarks and monuments in Halifax include Pier 21 - famous for being the historical entry point for a huge number of past immigrants; Halifax's Province House - the oldest seat of government in the whole of Canada; the Cathedral Church of all Saints - a breathtaking cathedral contain many important local artifacts and outstanding stained-glass windows; St. Mary's Basilica - an old Roman Catholic church in downtown Halifax, known for its imposing spire and museum; and St. Paul's Anglican Church - one of the country's most ancient churches, with impressive Georgian architecture and guided tours. More information about Halifax Tourist Attractions and Halifax Landmarks and Monuments.

Some of Halifax's main museums and art galleries include Art Gallery of Nova Scotia - containing an impressive collection of Nova Scotian and Canadian Art, together with works by many international artists; Maritime Museum of the Atlantic - celebrating the rich marine heritage of the Halifax area, with a number of small water craft and a host of local artifacts; Fultz House Museum - providing a real insight into historic life in Sackville, with recreations of shops, gardens and guided tours; and the Nova Scotia Museum of Natural History - full of local exhibits and educational / historic information about both Halifax and the province of Nova Scotia. More information about Halifax Museums and Art Galleries.

Tourist attractions located close to Halifax include Alderney Landing - a short ferry trip from Halifax's Dartmouth area, with a theater, park and famous farmer's market; Bluenose II - an authentic replica of a famous schooner, with regular summer cruises around the harbor; Bedford Institute of Oceanography - an important ocean research center, with many hands-on exhibits and information about the country's rich marine life; Fisherman's Cove - a historic village close to Halifax, known for its scenic boardwalk and notable restaurants; and Quaker House - one of the oldest residential buildings in the Halifax region, now fully renovated and offering guided tours. More information about Halifax Attractions Nearby.