Mention that you are headed to Alberta for your holidays and you will more than likely be greeted by a long list of suggestions for things to see and do. You will probably wonder how on earth you are going to fit them all in. The answer is, of course, that you won't. Alberta does, after all, attract more superlatives than any other province in Canada. It understandably takes time to see it all.

You could start by escaping to the country. Alberta has an abundance of mountains. Within those mountains are awe-inspiring glaciers, picture postcard lakes and high peaks that take your breath away. Towns like Lake Louise, Banff and Jasper are tourist havens. So too is the Banff National Park, which manages to combine its role as protector of the province's wildlife, with its grizzly and black bears, and provider of recreational activities to the tourists who come to ski and hike here.

When it is time to head back to the city, you will find that Edmonton isn't just Alberta's provincial capital, it also happens to be home to one of the world's largest shopping malls. The city has become quite the place to be in recent years, with its Old Strathcona district topping the urban popularity charts. In the south of Alberta, Calgary has transformed itself from a town brim full of cowboys to one of the fastest growing cities in Canada. Stetsons are still very much on show, but these days they tend to be sported by Albertans working in the burgeoning local oil industry.

Alberta's links with dinosaurs might seem tenuous, but a trip to the city of Drumheller at the heart of the Canadian Badlands soon puts you in the picture. Whilst the dinosaur theme of this self-styled 'Dinosaur Capital of the World' might be taken a bit too far for some visitors, it is definitely the place to head if you want to find out all there is to know about these Jurassic beasts. 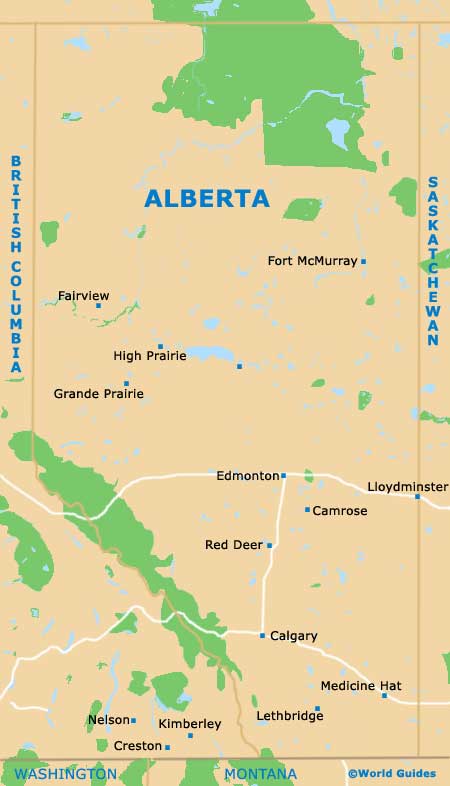