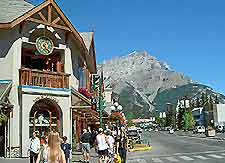 Despite its size, the Banff townsite is one of Canada's most popular tourist destinations and regularly attracts in excess of four million visitors each year. Known as the capital of the Canadian Rocky Mountains, Banff is a small alpine-style town located in Alberta (AB), within the vast and extremely scenic Banff National Park, which is part of the Rocky Mountain Parks World Heritage Site.

Most people travel to Banff to explore the National Park, which is filled with hiking trails and appealing views. Banff is particularly busy in July and August and is known for its relaxed, friendly residents.

With tourists so well catered for, hotels are located throughout the Banff townsite, although accommodation is often fully booked. Banff's main hotels and chain motels stand along the nearby Trans-Canada Highway, and also the centrally located Banff Avenue. Bed and breakfasts are particularly popular in Banff and more than 50 are dotted around the townsite. Further hotels can be found in the nearby town of Canmore, where accommodation is generally cheaper. More information about Banff Hotels. 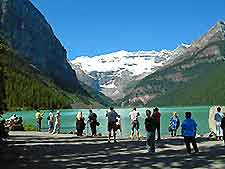 Tourism in Banff, the capital of the Canadian Rocky Mountains, is a major industry and the town thrives on the huge influx of visitors each year, with seasonal Canada ski holidays being an especially big draw card. The townsite's main tourist information bureau is the Banff Information Center along the central Banff Avenue. Here you will find a range of free leaflets about the main tourist attractions, tourism advice, travel tips, and information about the many walking trails and tours on offer in the area. Notable regions in and around the town include the downtown district / Banff Avenue, Lake Louise, Mount Norquay and the Vermilion Lakes, the latter of which comes with a series of enticing lakeside walking trails and superb mountainous scenery.

Banff's main tourist attractions and landmarks include the Banff Sulphur Mountain Gondola - regular cable-car rides, featuring some of the best views of the Canadian Rockies and endless scenery; Lake Minnewanka - a particularly scenic spot, with plenty of native flora and fauna, boat tours and fishing; Banff Rafting River Tours - offering a variety of packages available along the Bow River and Kicking Horse River, passing many of Banff's most notable landmarks; and the Upper Hot Springs - naturally steaming pools used for bathing by both locals and tourists in the Banff area, overlooking nearby mountains and forested areas. More information about Banff Tourist Attractions and Landmarks. 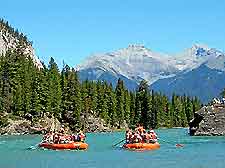 Some of Banff's main museums and art galleries include the Banff Park Museum - celebrating this National Historic Site, full of information about Canada's approach to conservation and native wildlife; Buffalo Nations Luxton Museum - dedicated to the history of Canada, with many important artifacts and exhibits, together with seasonal outdoor events and ceremonies; Canada House Gallery - with a large collection of works by Canadian artists, including a number of impressive Inuit paintings and temporary exhibitions; Canadian Ski Museum West - featuring a range of in-depth displays about skiing in Canada, with information about Banff's main ski resorts; and the Whyte Museum of the Canadian Rockies - situated near to Banff Avenue, with an art gallery, photography exhibition, summer concerts and information about the world-famous Canadian Rocky Mountains. More information about Banff Museums and Art Galleries.

Tourist attractions located nearby Banff include Calgary - one of the country's largest cities, full of superb tourist attractions and easily reached by car, with the journey from Banff lasting around one and a half hours; Bow Lake - part of the 'Great Divide' icefield just a short trip from Banff, with hiking trails, a lodge and stunning locations ideal for picnicking; Columbia Icefield - a vast expanse containing an ice plateau, glaciers, regular guided tours and unforgettable views; Canmore Caverns - an enormous network of caves and underground passages, in the nearby town of Canmore; and Crowfoot Glacier - a famous glacial structure, standing along the Icefields Parkway, close to the Banff townsite. More information about Banff Attractions Nearby.