Suffolk offers a taste of times gone by. Events happen elsewhere and the good folk of this most sedate of English counties are content to let other people live life in the fast lane. Agriculture still plays a large part in the daily routine here and agricultural events, such as the Suffolk Show, loom large on farmhouse calendars. Prolific vegetable growing in the area means that Suffolk has become the adopted home of Branston Pickle, a staple in British larders since the 1920s. The county is also the site of the largest UK factory owned by Birds Eye, that doyenne of frozen foods.

The pastoral Suffolk landscape with its woods, rivers and meadows has always been popular with artists. In the past, these have included the likes of Thomas Gainsborough, who was born in the town of Sudbury, and John Constable of 'The Hay Wain' fame. Indeed, Suffolk is often known as 'Constable Country'. Ignored by the Industrial Revolution of the 19th century, some of Suffolk's villages appear to have changed very little since the time that these two great artists set off into the countryside with pallet and easel.

Eastern Suffolk was once the focus of the world's attention thanks to an amazing discovery. A short distance from Ipswich is the site of Sutton Hoo, which in 1939 witnessed the most significant Anglo-Saxon find in Britain. Treasures unearthed from the soil included gold and silver ornaments, as well as a warrior's helmet, all of which are now on display at the British Museum in London.

Each year, thousands of visitors come to the Aldeburgh Festival, currently one of the largest classical music festivals in Britain. This event was the brainchild of a group of musicians that included the famous English composer Benjamin Britten, who intended it as a home for the English Opera Group. 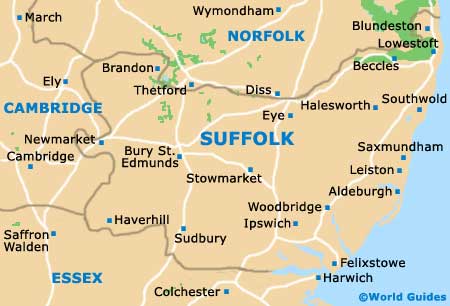