Most people expect the county of South Yorkshire to offer nothing more than a view of a dark industrial landscape, with coal mines and factories at each and every turn. At the centre of this image is Sheffield, a city built on stainless steel and famous for its canteens of cutlery.

Today, many of South Yorkshire's foundries and pits have been silenced, thanks to a decline in British manufacturing. Nonetheless, the county is still very much alive and kicking - albeit sporting quite different interests nowadays. In the past decade or so, this northern county has worked hard to reinvent itself as a place of character and post-industrial charm.

Sheffield doesn't feature on many tourist itineraries, which is a shame. It boasts some grand Victorian architecture, as well as museums and parks, and a thriving music scene. In fact, the city is widely regarded as having some of the best clubs and music venues in Britain, including the Sheffield Arena. The city attracted considerable interest with the release of 'The Full Monty', a film that told the story of half a dozen unemployed Sheffield steelworkers.

South Yorkshire isn't just about urban life and this county boasts a very healthy outdoor aspect. Sheffield is one of the main gateways into the Peak District, Britain's first national park and today, considered to be the world's second most-visited park. 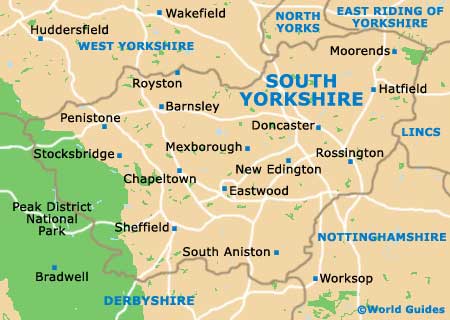