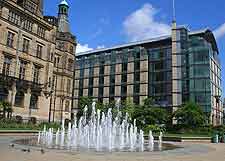 Still strongly associated with the movie blockbuster 'The Full Monty', there is so much more to Sheffield than its famous steel and cutlery industry. Sheffield is the fourth-biggest city in the whole of the country and as a result, is full of places of interest and sights to see. Tourists visiting Sheffield will have plenty to fill their days, as the city's tourism industry is booming and there truly is something for everyone in this part of South Yorkshire. Whether you are looking for walking trails, sporting venues, botanical gardens, shopping, fine dining, Victorian architecture, museums with information about the city's history and heritage, or even skiing, Sheffield has is all.

A significant university city, Sheffield is actually home to two separate universities, the Hallam University, which features three different campuses, and the University of Sheffield, comprising a number of individual buildings close to the centre. In total, almost 60,000 students attend the city's universities and bring a strong youthful feel to these areas, particularly with regards to the night-time entertainment on offer.

The accommodation and dining scene in the city is quite reasonable. B&Bs and hotels in Sheffield are concentrated on the south-westerly side of the centre, within the Nether Edge suburb and in particular along Montgomery Road, Moncrieffe Road and Wostenholm Road, between the Hallan University campus and Meersbrook Park. Close by Sheffield, further accommodation resides within the market towns of Chesterfield and Rotherham, as well as at the village of Hathersage, in the Peak District. If you are dining out, then consider the restaurants and bars located along Devonshire Street, Division Street, Ecclesall Road (A625) and Glossop Road. 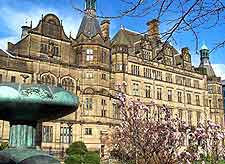 Sheffield's most outstanding tourist attractions include Don Valley International Stadium - a major sports venue which can hold approximately 50,000 spectators; Sheffield Ski Village / Adventure Mountain - an enormous all-season ski attraction where you are able to ski and snow board; Walking Trails - including a number of city and riverside pathways, such as the Five Weirs Walk, Norfolk Heritage Trail, Rivelin Valley Natural Trail, Round Walk, and Sheffield and Tinsley Canal Trail; Graves Park and Rare Breeds Centre - a great place for families to visit, with a mixture of farmyard and domestic animals, together with educational information, A & G Passenger Boats / Cruises - an especially scenic way to tour Sheffield's Tinsley Canal waterway; and the Botanical Gardens - with an immense collection of both native and exotic plants, right in the heart of the city. 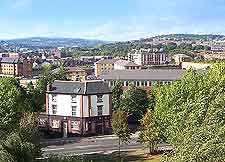 Important landmarks within the city include Sheffield Town Hall - a particularly eye-catching Victorian building, known for its modern fountain and adjacent Peace Gardens; Beauchief Abbey - founded in the latter part of the 12th century, with just the western tower still standing; Manor Lodge - built in the 16th century and famous for being used to imprison Mary, Queen of Scots many years ago; Cathedral Church of St. Peter and St. Paul - one of Sheffield's few Grade I listed buildings; Paradise Square - home to a selection of attractive and recently renovated Georgian town houses; and the Winter Gardens - Europe's large city centre temperate glasshouse, located in Sheffield's Tudor Square area. More information about Sheffield Tourist Attractions and Sheffield Landmarks and Monuments. 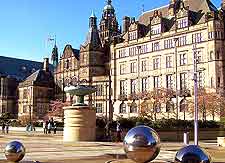 Some of the main museums and art galleries in Sheffield include Weston Park Museum - often referred to as the City Museum, this popular tourist attraction in home to five interactive exhibition areas, and some interesting local information and artefacts; Kelham Island Museum - with a host of information about the acclaimed Sheffield steel industry and age of steam; Millennium Galleries - an impressive venue in Sheffield city centre, with four individual gallery spaces and many temporary exhibitions; Bishop's House Museum - a historic building with period Tudor-style features and furnishings; and the Graves Art Gallery - sited above the library and housing a number of paintings by prominent modernist artists, including none other than the great Picasso himself. More information about Sheffield Museums and Sheffield Art Galleries. 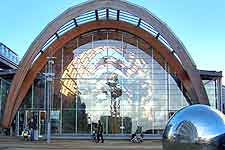 Tourist attractions in both Derbyshire and South Yorkshire, close to Sheffield, include the Peak District. One of England's largest and most notable National Parks, the Peak District contains many extremely scenic walks, often with seemingly endless views. Also nearby Sheffield and appealing to visiting tourists are the towns and villages of Bakewell, Buxton, Chatsworth, Chesterfield, Matlock and North Anston, with a butterfly house, stately homes, adventure playgrounds and landscaped gardens just being a few of the highlights on offer. More information about Sheffield Attractions Nearby. 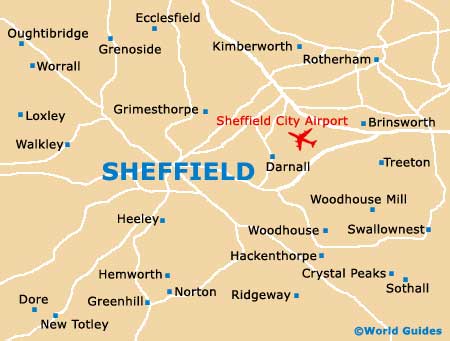