Merseyside is a relatively new county. It didn't exist as such until 1974, when the government decided to combine the five metropolitan boroughs of Knowsley, St. Helens, Sefton, the Wirral and the city of Liverpool.

Liverpool hasn't always been seen in the best of lights, thanks to a period of economic decline. In recent years, though, it has managed to transform itself from gritty northern city to a thriving cultural centre. You only have to see the iconic Liver Birds perched aloft the Royal Liver Building to know where you are. Liverpool was the home of The Beatles - nicknamed the 'Fab Four', who frequently performed at the Cavern Club. Two of the most famous houses in Liverpool are Number 20, Forthlin Road and 'Mendips' (251 Menlove Avenue), the respective childhood homes of Paul McCartney and John Lennon. Few visitors to Liverpool can resist a ferry trip across the Mersey.

Outside of the city limits, Merseyside shows many more sides to its multifaceted character. The Wirral Peninsula - more commonly known as 'The Wirral', has a reputation for being a cut above the rest of Merseyside. Originally, it was part of northern Cheshire. Its largest town, Birkenhead, was the beneficiary of the first publicly funded park and it is widely believed that this very park was actually the inspiration behind the development of New York's Central Park. Port Sunlight Village was created here in the late 19th century by William Hesketh Lever of soap fame, and has been carefully preserved for future visitors to Merseyside.

A holiday on the Wirral tends to be a traditional affair with oodles of English seaside charm. The sandy beaches of West Kirby, New Brighton and Hoylake are accompanied by promenades for a bracing stroll or two. Interestingly, the weather on this part of the English coast is reputed to be not quite as bracing as elsewhere. West Kirby, in particular, boasts an unusually sunny climate.

Head north from the Wirral and you will encounter more Merseyside gems. During the summer, there is always a steady stream of visitors heading for Formby, with its sand dunes and population of red squirrels, a rare sight these days in England. Likewise, the seaside resort of Southport is a popular place for families and tourists to visit, thanks to its vast expanse of sand and elegant glass-canopied shop fronts.

Merseyside is also home to the Aintree Racecourse, which is perhaps best known for staging the infamous Grand National steeplechase each year. The course used is particularly demanding, with many competitors failing to complete the race. 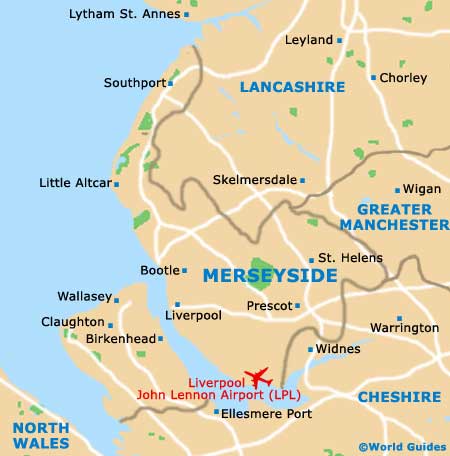