Situated in the East Midlands, Leicestershire may not, at first glance, appear to have that much to interest the casual visitor. Most would be hard pressed to name any iconic landmarks or attractions here.

It was for this very reason that the Leicestershire town of Kibworth was chosen to feature in a recent television documentary of the history of England, presented by the historian Michael Wood. This series was aimed at tracing the history of ordinary people in a very ordinary English town.

Look carefully, though, and you will discover that Leicestershire does have some great historical sites - one of them is Belvoir Castle. There is also still evidence of the county's industrial heritage. From bellfounding in the 14th century to sports car manufacturing in the 20th century, engineering has played a huge part in the lives of Leicestershire folk. In fact, it is still the home of Triumph Motorcycles, based in Hinckley.

Then there is that great melting pot of Leicester, a city that proudly wears its multiculturalism on its sleeve. This is one of England's most ethnically diverse urban centres. Leicester Market is regarded as the biggest outdoor covered market in the whole of Europe. The city is also renowned as a centre for Indian food, being home to some 15 large Indian food companies and a plethora of Asian restaurants.

A sizeable percentage of the north-western part of Leicestershire has been designated as the National Forest, an environmental project aimed at planting a new forest to blend in with existing ancient woodland. The planting didn't start until the 1990s, so it will be some time before this 'forest in the making' grows into something more substantial.

Castle Donington is the home of Donington Park, a venue for major music festivals, such as 'Monsters of Rock' in the 1980s and 1990s, and currently the Download Festival. The Park has also hosted many motor Grand Prix races. 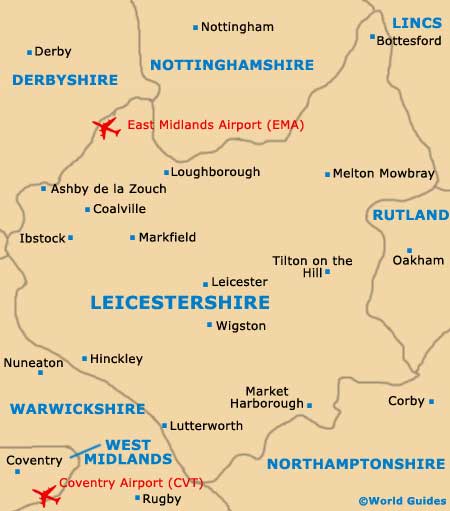