Derbyshire is dominated by the Peak District National Park, which covers a large part of the county. Whether inside or outside the park, Derbyshire's countryside is equally beautiful. Upland moorland drops down to meet verdant valleys that are dotted with remote farmhouses and sparsely populated hamlets.

Outdoor attractions include Kinder Scout, the highest point in the Peak District, and Mam Tor. The latter is also rather enigmatically known as the 'Shivering Mountain', not because of the chilly temperatures recorded here in winter, but because of the instability of the shale that makes up its slopes.

Derbyshire's natural wonders are as much below ground as above. The Blue John Cavern and the Speedwell Cavern are two famous show caves from which minerals were once mined. Today, Britain's fluorite supply only comes from the Blue John Cavern or the nearby Treak Cliff Cavern.

People have been holidaying in Derbyshire since Victorian times, when it became particularly popular to 'take the waters' in the spa towns of Buxton, Bakewell and Matlock Bath. The poet Ruskin particularly liked the latter, by all accounts, as did Lord Byron. Indeed, Matlock Bath became known as 'Little Switzerland'. Rather bizarrely, this tiny village still has something of a 'seaside resort' feel to it today, complete with a cliffside cafe and cable cars. On public holidays, it is also a popular meeting place for motorbikers.

Derbyshire remains one of the most often visited counties in England. Other attractions include the many stately homes built here, including Chatsworth House in North Derbyshire, and Bolsover Castle. 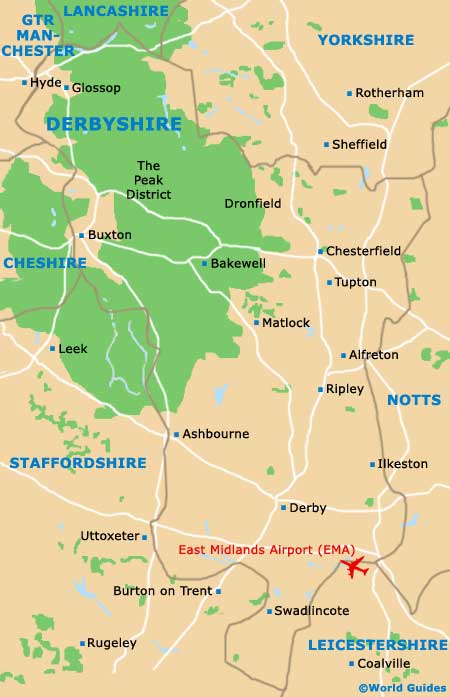