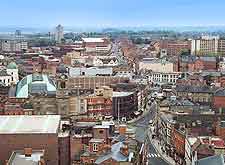 A vibrant city lying on the southern side of Derbyshire, Derby has been transformed by the fortunes of its historic silk production, Royal Crown Derby bone-china, renowned Rolls Royce engine production, and now to some extent, tourism. The cosmopolitan city of today is a great place to shop, sightsee and socialise, and is conveniently close to the Peak District and the National Forest.

Many of the tourist attractions and shops reside within the central Cathedral Quarter of Derby, and around the areas known as the Cornmarket, Iron Gate, Sadler Gate, the Strand and the Market Place, which is where the local Tourist Information Centre is located, within the Assembly Rooms. A short bus trip away is the huge Westfield Derby shopping mall, which features almost 200 stores and a very upmarket Cinema De Lux complex on its top floor. 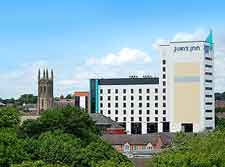 There really are a wealth of green spaces sprinkled around the city of Derby, with favourites including the Riverside Gardens and Bass's Recreation Ground, both of which front the Derwent River. Markeaton Park is also popular and comes with its own light railway, although its steam train rides are sadly now a thing of the past. The Derby Arboretum is one of the city's most spacious and heavily used public spaces and was donated to the city as long ago as 1840. Guided tours of the Royal Crown Derby Factory on Osmaston Road are certainly a must, while soccer fans may be lucky enough to catch a game at the modern Pride Park Stadium. More information about Derby Tourist Attractions. 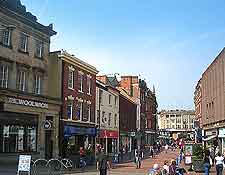 When it comes to landmarks in the city, few compare to the Derby Cathedral (Cathedral of All Saints), which is located in the Iron Gate area and dates from the 14th century. There are also a number of listed buildings present in the city, such as St. Helen's House on King Street and the Derby Market Hall on the Market Place, which is typically Victorian in character. On Bridge Gate, St. Mary's Church is another local landmark of note, as is the university complex in the Allestree area. Just minutes from the city, a visit to the National Trust's acclaimed Kedleston Hall comes highly recommended. More information about Derby Landmarks and Monuments. 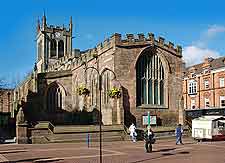 There are several museums in Derby, each of which provides different information about the city's history and periods. The Museum of Industry and History at the Silk Mill remembers the vast scale of silk production here in the 18th century, when the machinery was considered to be the state-of-the-art and used by a staff of some 300 people. Derby is now rather famous for its hauntings and supernatural apparitions, and the Friar Gate Gaol is certainly the place to find out more about the city's ghostly goings-on, and now even offers evening ghost walks. One further cultural attraction to consider is the Derby Museum and Art Gallery, which features a mixture of art works, porcelain, geology and Derbyshire fossils. More information about Derby Museums and Derby Art Galleries. 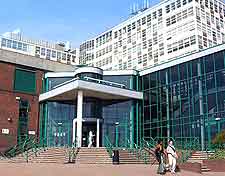 The wider area is quite appealing to city visitors, and Derbyshire has many attractions highly suitable for day trips. These include the village of Darley Abbey and Derwent Valley Mills, which is now a proud World Heritage Site. Tourists may also like to journey to the market towns of Ashbourne and Bakewell, or to the spa town of Buxton, to sample its renowned mineral water, which is now known all over the world. Further afield, popular excursions from Derby include Birmingham, Castle Donington, Coventry, Nottingham and Sheffield. The neighbouring village of Matlock Bath enjoys a thriving tourism industry and is home to amusement arcades, cable cars, and the Gulliver's Kingdom children's theme park. More information about Derby Attractions Nearby. 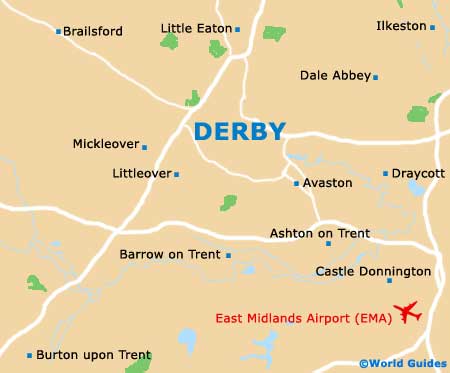