The classic way to view New Zealand's South Island is to get behind the wheel and drive. Take in all that scenery, including the all-dominating Mount Cook, enjoy the towns and cities you end up in, and soak up some of the laid-back attitude of the friendly people you meet along the way.

There is no better place to start than by winding your way through the Marlborough Sounds, a maze of waterways that is located conveniently close to the South Island's Marlborough wine region.

It is true to say that Nelson is the centre of New Zealand - well, it is certainly the geographic centre. It is also the second-oldest city to be settled here and has something of an alternative feel about it. Surrounded by mountains and bathed in above-average hours of sunshine, the Nelson region has become a centre for ecotourism on the South Island.

Further south, the region of Canterbury has plenty of history to offer. Christchurch is as close to an 'English-style' city as you will get in New Zealand. Unfortunately, it has experienced several earthquakes in the past few years, resulting in damage to many buildings, including the city's cathedral.

Back to the coast of the South Island, and the Otago region is a place where you can really reconnect with the adventure-seeking side of your personality. The main tourist centre is Queenstown where, by day, you can try your hand at any number of extreme sports, from jet boating and whitewater rafting to bungee jumping. By night, it is time to ditch the safety harness and enjoy the city's vibrant nightlife. Queenstown has been the backdrop for many a movie, including the 'Lord of the Rings' trilogy.

State Highway 94 is one of the most scenic roads in New Zealand, connecting Otago's Milford Sound, much rated by Rudyard Kipling, with the town of Gore in Southland, truly a place of superlatives. It is home to New Zealand's highest waterfall, the Browne Falls, as well as its deepest lake, Lake Hauroko. Fiordland, with its mountains, glacial lakes and deep fjords, is the country's biggest national park.

The West Coast of the South Island is a land of wild coastlines, rugged mountains and acres of rainforest. The region was left largely untouched until gold was discovered, giving birth to towns like Okarito and Hokitika. If the weather is clear, there is nothing quite like a drive along the West Coast.

Finally, there is Tasman, home to New Zealand's deepest caves at Ellis Basin and Nettlebed, lots of lovely golden sandy beaches, and Farewell Spit, a bird sanctuary of some considerable repute. 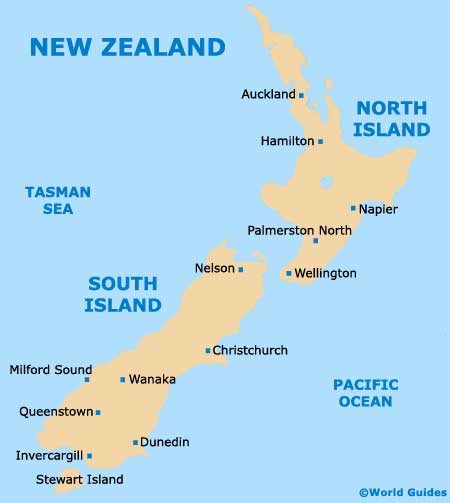