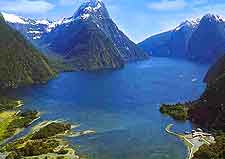 Milford Sound doesn't receive mass tourism numbers, thankfully, yet visitors do come in their busloads to see the striking scenery of Mitre Peak and its associated sharp granite mountains created by glacial action. Most tourists arrive here on a cruise of this spectacular sound, or take to the skies on a flight from Queenstown.

A large number are also day trippers from Queenstown, who arrive by bus so that they can enjoy a two-hour long cruise along this gorgeous stretch of water. Milford Sound is also the finish point of the world famous Milford Track. Of note, tourist information is best had at the Fiordland National Park Visitor Centre in Te Anau. 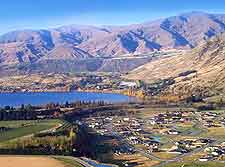 Cruises form the principal attraction here and provide the easiest way to tour Milford Sound. Various different cruise operators are available, such as Great Sights, Kiwi Discovery, Mitre Peak Cruises and Real Journeys, with early morning cruises being preferable if you are looking to avoid queues and crowds. Apart from the boat trips, tourists in the Milford Sound area may like to visit the Milford Deep Underwater Observatory, where the fish and underwater creatures can be viewed from a circular chamber beneath the water's surface. Those who prefer a walk are advised to check out the innumerable tramping trails within the Fiordland National Park, which boast endless scenic views. Guided hikes are available with Trips 'n' Tramps, or alternatively you can arrange a self-guided trek through the Department of Conservation. More information about Milford Sound Tourist Attractions. 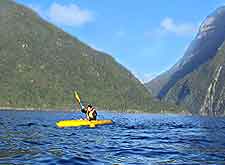 When it comes to landmarks around Milford Sound, it is the towering Mitre Peak that steals the show, dominating the area with its highest mountain peak, while the panoramic Milford Road stretches for some 120 km / 75 miles and passes through the famous Homer Tunnel. Especially close by are the popular Te Anau Caves, which are known for their sizeable caverns, underground waterfalls and surrounding glow-worms. Also near to Milford Sound are a couple of further lakes, both of which offer cruises and related attractions. The vast Lake Te Anau lies to the south, where it is actually the second-largest lake in New Zealand. Lake Manapouri is to be found a little further south and contains a number of islands. However, it is the enormous power station located on the West Arm that serves as the biggest tourism magnet here. More information about Milford Sound Landmarks and Monuments. 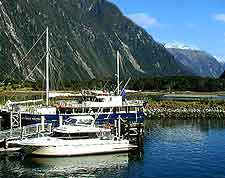 The Fiordland National Park really is the place to come for outdoor activities and recreational attractions, and as such, museums are not really in great supply in this part of New Zealand's South Island. Within reach of Milford Sound is the Fiordland National Park Visitor Centre and Museum at Te Anau, which offers plenty of information about the walking trails and the weather. In Wanaka, the Warbirds Museum contains much memorabilia relating to the Second World War and the important part that New Zealand's pilots played. However, it is Queenstown where culture is at its most abundant, although both Wanaka and Queenstown are a little too far away for a practicable day trip, unless you are prepared to catch a morning flight. More information about Milford Sound Museums. 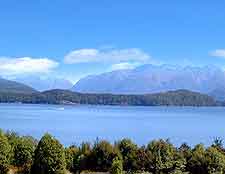 Excursions to Queenstown are extremely popular and this is a major tourist destination on the South Island, being just over four hours away by car and located to the south-east. Directly to the east of Milford Sound and approximately five hour's drive away is Wanaka, which functions as a gateway to the spectacular Mount Aspiring National Park. Holiday makers head to the Wanaka area during New Zealand's winter season, since the neighbouring Harris Mountains, Pisa Range and the Treble Cone all provide exceptional skiing. The small town of Te Anau is considerably nearer, at two hours to the south, and for those who enjoy an early morning start, is suitable for a day trip. Whilst the attractions of Te Anau are far from plentiful, Lake Te Anau provides plenty of interest, along with the adjacent Lake Marian. Located on the northern shore of Lake Wakatipu, Glenorchy is actually quite close to Milford Sound, although by road, you will need to take a lengthy drive around its outlying mountains. More information about Milford Sound Attractions Nearby. 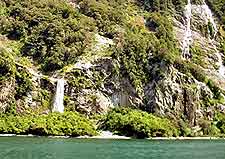 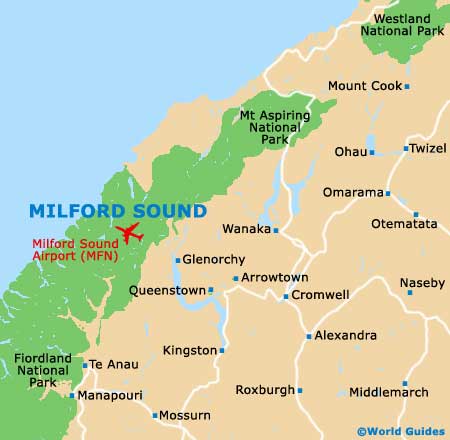