Part of the state of New South Wales, the Australian Capital Territory can lay claims to being the smallest of Australia's self-governing territories. Basically, it consists of one major city, Canberra, together with a handful of small towns and homesteads.

There is no doubt that Canberra is the highlight of this piece of Australia's Limestone Plains. It is an orderly sort of place, planned to within an inch of its life by an American architect called Walter Burley Griffin, whose other architectural triumphs include the invention of the carport. Today, Canberra is less of a staid capital city and more the sort of place where people actually want to hang out. Its bars and restaurants are frequented by a myriad of the city's movers and shakers. Its festivals are much loved by the city's student and creative communities. Canberra is also home to some of the country's best museums.

Outside of Canberra, though, there is a whole lot of landscape, an untamed world of mountain slopes and bushland that is home to cattle and sheep rather than people. This rural landscape is broken up by numerous vineyards. Wine has been produced around Canberra for over 150 years. It is claimed that around 140 vineyards and over 30 wineries are located within a short drive of the city.

A large part of the Australian Capital Territory is also given over to protected land. The mountains and forests of the Namadgi National Park are an attractive proposition for outdoor and nature enthusiasts. During the 1960s, this part of the Australian Capital Territory also took its first steps into the space age. Tracking stations were set up at Honeysuckle Creek to support the Apollo Moon mission. Today, the Canberra Deep Space Communication Complex is in charge of much of NASA's Australian space tracking activity. 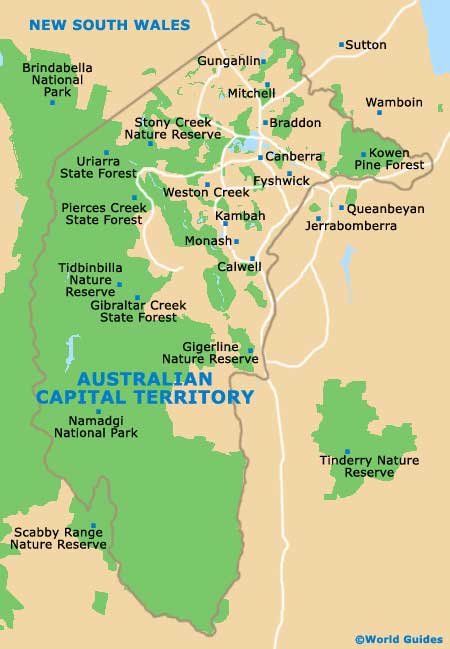