Shaanxi has impeccable historic roots, which have earned it the title of 'the cradle of early Chinese civilisation'. This relatively central Chinese province is the home of the ancient provincial capital of Xian. It is also at the eastern end of the Silk Road, which traditionally has linked Asia with Africa and Europe. Along it, Chinese silk has traded, with snippets of religion or philosophy.

Today, Shaanxi is a somewhat quieter place. Whether or not it remains at the heart of Chinese civilisation today is uncertain. It is, however, one of the most tourist-friendly provinces in the country, a fact that hasn't gone unnoticed. Tourist figures for foreign and domestic visitors are both on the rise.

Shaanxi's 150 museums and 35,000 sites of cultural relics, including ancient cities and palaces, as well as tombs and temples, emanate an aura of times gone when China was a very different place. The roll call of Shaanxi's highlights starts in the ancient city of Xian with its City Walls, Great Mosque and Terracotta Army.

Coupled with all that history, Shaanxi has the good fortune to be blessed with a rather wonderful landscape, too. There are waterfalls, high plateaus and high mountain peaks in abundance. Among them is Mount Hua, one of China's Five Great Mountains and much acclaimed in China. Deemed to be sacred and a place of pilgrimage over the years, the climb to Hua's peak became more of a climbing challenge in the 1980s than a religious ritual for some enthusiastic souls. A modern cable car nowadays eliminates any need to test your mettle. 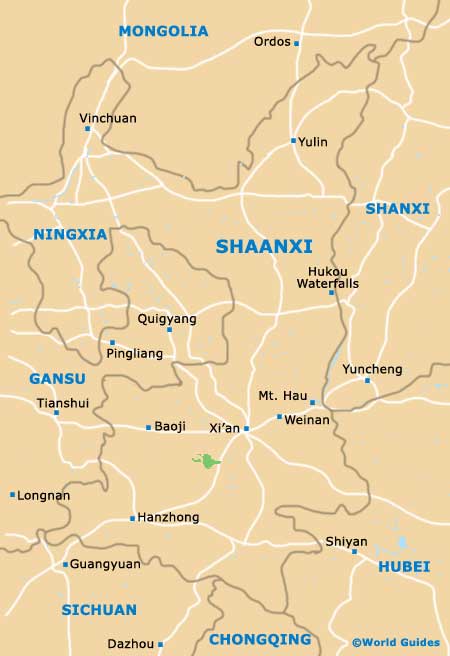