Utah's vast natural landscapes really are something special. Little wonder then that it is seen by many outdoor enthusiasts as something akin to paradise. Southern Utah is all about its national parks. An abundance of desert and sand dunes grace the landscape, as well as brilliantly colored canyons and mountain peaks.

There is nothing quite like setting foot, or tyres for that matter, on the salty crust of one of Utah's salt flats. Perhaps the best known is the Bonneville Salt Flats, which is located in northern Utah, west of the Great Salt Lake. The exciting Bonneville Speed Week takes place here every August, with contenders seeking to set new land speed records in their chosen mode of transport. Of interest, the very first land speed record was set here in 1914.

The Great Salt Lake itself is thought to be the largest of its kind in the Western Hemisphere. That salty crust might look dead (the lake is actually also known as America's Dead Sea), but there is actually quite a lot of wildlife around the lake. A variety of creatures have evolved to survive the inhospitable conditions, many of them birds.

Utah is closely associated with a community of Mormons, who arrived here in 1847 and came to adopt this state as their home. Under the leadership of Brigham Young, they began to build Salt Lake City and reestablish the Church of Jesus Christ of Latter Day Saints (LDS).

Salt Lake City was the venue for the 2002 Olympic Winter Games. Utah's snow is seen as being very special, with the dry powdery flakes falling at decent depths on some of the most challenging slopes around. Utah is also rich in mineral resources, including oil and copper, as well as gold and silver. It is the only state where you can find gilsonite, a very pure form of asphalt used in some printing inks and paints. 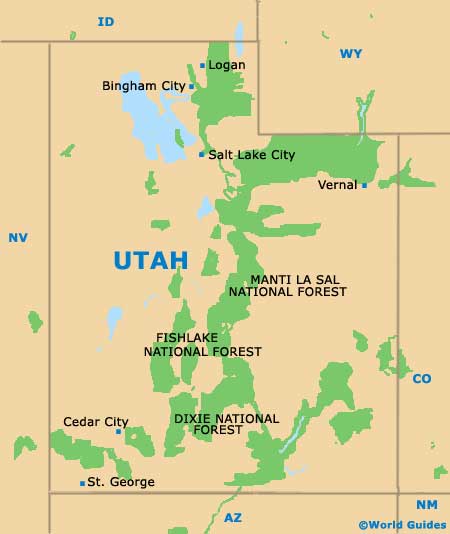