South Dakota is a Midwestern state with a difference. It isn't quite like any other place that you've ever visited. For a start, most of the state - particularly the western part, feels incredibly wild and remote. The majority of South Dakotans tend to live East of the Missouri River, a natural landmark that neatly cleaves the state into two.

A list of South Dakota's top visitor attractions includes some of the most unusual natural features to be found in America. Top of the list is the infamous Badlands. With its sea of eroded spires, it is second only to the Grand Canyon when it comes to weird and wonderful rock shapes.

Second on the list of South Dakotan 'must-sees' is a mountainous area known as the Black Hills. Situated on the border of South Dakota and Wyoming, this is where you will find the iconic Mount Rushmore and the emotionally charged Crazy Horse Memorial. South Dakota's history is closely tied up with the Sioux tribe who have lived here for hundreds of years and believe that the Black Hills are sacred. There are several Native American reservations in the state today.

South Dakotan culture is heavily influenced by its Native American heritage, as well as its European and pioneer roots. Its annual calendar of events features the Custer State Park's Buffalo Roundup, as well as the Days of '76 rodeo in the city of Deadwood. This state is also the home of the annual Sturgis Motorcycle Rally, which has been attracting crowds of enthusiasts from all over the US since 1938.

To get a close-up of what life was like in a pioneer state such as South Dakota, it is worth turning the pages of one of the many semi-autobiographical books by Laura Ingalls Wilder, who grew up here in the 1870s. 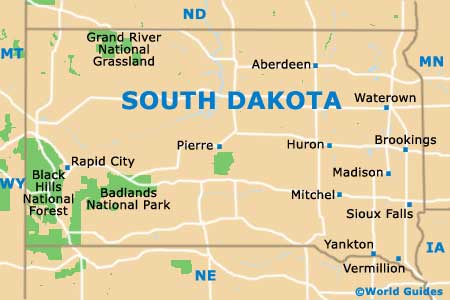