In some respects, New Jersey is a busy city-based state. It is true to say that in the northeast, within the area known as the Gateway Region, it is quite urban in feel. Most of New Jersey's cities are located here and this area can be seen as a commuter suburb for nearby New York City. The Delaware Valley in the southern part of the state is also quite heavily populated.

Head out to the northwest and you will discover that New Jersey is also a land of rolling hills, rivers and lakes. Then there's the coastal part of New Jersey. The Jersey Shore stretches from the beach at Sandy Hook right down to that archetypal seaside resort of Cape May. Further south is Pine Barrens, an area that definitely has more trees than people.

The state's location means that it is always been at the heart of historical events in America. It is known as 'The Crossroads of the American Revolution', mainly because both the British and American armies crossed the state so many times during the war. Morristown was the winter headquarters used by George Washington, and so this is widely regarded as the military capital of the Revolution.

New Jersey was also at the center of scientific discovery. Thomas Edison began his career as an inventor in Newark. During his lifetime, he was granted over a thousand patents, many of them during the time he spent in New Jersey. He was known as 'The Wizard of Menlo Park', because this was where his experimental laboratory was originally based.

New Jersey's MetLife Stadium is the home of the New York Giants and the New York Jets, both of whom compete in the US National Football League. The Giants have a long history - they were one of the first five teams to join the League back in 1925 and of those founding members, they are the only surviving team. 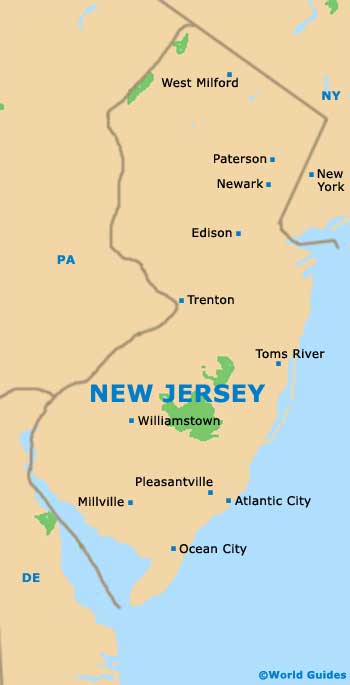