Missouri is in Great Plains country and it would be very easy to head across it at high speed, with your foot planted firmly on the accelerator pedal. If you did, though, you'd be sure to miss out on such great cities as St. Louis and Kansas City. You would most certainly miss a trick if you didn't stop off for at least a glimpse of the Ozarks.

Despite the fact that, in the past, Missouri used to be seen as something of a Southern US state, today it is widely regarded as being classic Mid-West. It has a good mix of urban, suburban and rural residents whose opinions are thought to mirror most aspects of American life, from gay rights and medical research to politics. Since 1904, with only two exceptions, the state has voted for the winning US presidential candidate. As such, a political phenomenon has been named after this state - the 'Missouri bellwether'.

Kansas City once used to reverberate to the sound of Charlie Parker, or the 'Yardbird' as he was also known. Parker, who played in local clubs all around the city during his early career, was an influential jazz saxophonist, as well as a composer. He was also a major player in the 'bebop' movement. Meanwhile, St. Louis was the starting point for the likes of Scott Joplin and Tina Turner, who met her future partner Ike at Club Manhattan in East St. Louis.

Today, one of Missouri's top attractions for visitors to the state is Branson. The city sees around 4,000 bus loads of tourists arrive each day. Many are drawn in particular to the theaters that have grown up around the city center, including the Roy Clark Celebrity Theater, which has given a step up to many young hopefuls since its opening in the 1980s. 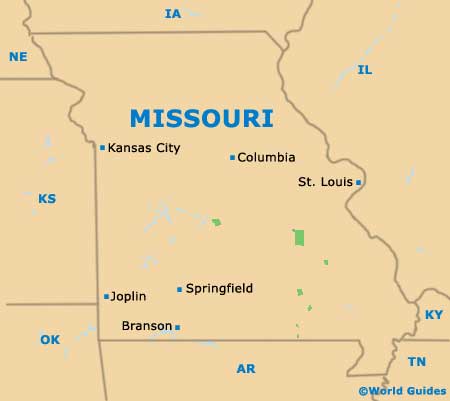