Maine is the most northeasterly state in the US. It is a quintessentially New England state that is epitomized by mile upon mile of rocky coastline, complete with dozens of lighthouses, lots of quaint fishing villages and a myriad of islands. There is no shortage of decent scenery either. Maine's nickname is the Pine Tree State, which is very apt considering that roughly nine-tenths of land here is covered by forests. As the most sparsely populated state east of the Mississippi, there are relatively few people to share it with.

Maine exudes a rural charm and boasts a real sense of history, making it a popular tourist destination these days. The first English settlement in Maine was set up by the Plymouth Company in 1607. The Popham Colony, as it was known, didn't last long, and the colonists returned to England just over a year later. In 1641, the city of York was the first in the US to gain a charter.

Visitors regularly come to Maine to enjoy their favorite sport. With thousands of lakes and rivers populated by an abundance of landlocked salmon, trout and perch, Maine is a fisherman's favorite. Winter sports are big here too. The state has more than 25 ski areas, including the popular Sugarloaf, a leading ski resort based in western Maine. 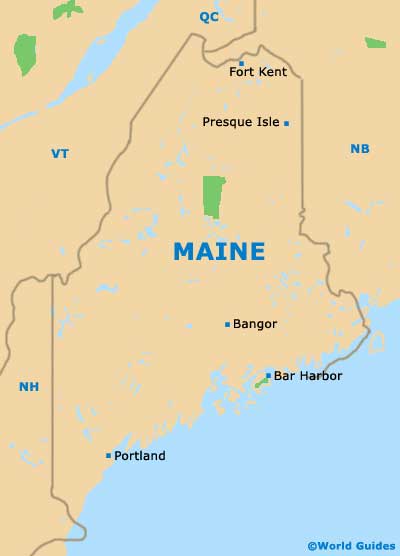