It may be known as the Bluegrass State, but there's certainly more to Kentucky than a particular brand of music played on a banjo at high speed, and a springtime transformation that turns green grass a hazy shade of blue. Kentucky is also the epitome of Southern-style elegance, from its historic houses, complete with wooden verandas and aristocratic legacies, to its old-style towns and cities.

This American state is also home to hundreds of high-quality horses, which thrive on the very high-calcium content of the soil found here. The biggest day in the Kentucky calendar is the first Saturday in May. At the annual Kentucky Derby race, horse owners get together for what's been classed as 'The most exciting two minutes in sports'.

Perhaps less well-known is the fact that between the state's boundaries, there is some incredibly diverse countryside. At the heart of the state is the Mammoth Cave National Park, the home of the longest cave system in the world. Another special environmental feature is that Kentucky has the greatest length of navigable streams in the US.

Kentucky was admitted to the Union in 1792, when it was the 15th state and one of the few to be allowed to use the term 'Commonwealth'. It became a major slaveholding center in this region of the US and a busy market was set up in the capital of Louisville.

Today, Kentucky is one of the top four car manufacturers in the US, with Corvettes and Cadillacs rolling off the state's production lines at a rapid rate. 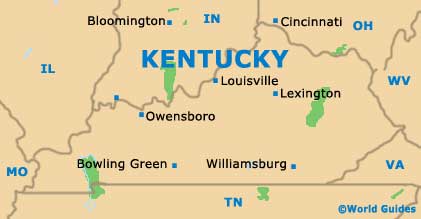