Kansas is classed as a US Midwest state. Surrounded by Nebraska, Missouri, Oklahoma and Colorado, it also lies at the geographic center of America's 48 contiguous states. The exact spot is in Smith County, south of the town of Lebanon. It is also equidistant between the Pacific and Atlantic oceans.

Two-thirds of Kansas can be classed as belonging to the US Great Central Plain. It is not without good reason that the official state song is 'Home on the Range'. Originally entitled 'Oh, Give Me a Home Where the Buffalo Roam', it was quickly adopted by cowboys and settlers all over Kansas during the late 19th century. Of note, Kansas was named after the Konza Indians who lived here before European colonists arrived.

Unlike many other US states, a large number of towns and cities in Kansas aren't actually growing. Over the last few decades, the state has acquired more and more 'ghost towns', the sort of places where community life is dwindling at a steady pace. That said, Kansas City continues to grow in popularity, regularly winning awards for being generally a good place to set up home. In fact, in the year 2010, Money Magazine voted Kansas City the seventh-best US city to live in.

Famous Kansans include former US president Dwight D. Eisenhower and the first woman to fly solo across the Atlantic Ocean, Amelia Earhart. Perhaps less well-known is the Kansan inventor Omar Knedlik, who is said to have invented the ICEE, America's first frozen 'slushy' soda machine, back in the early 1960s. 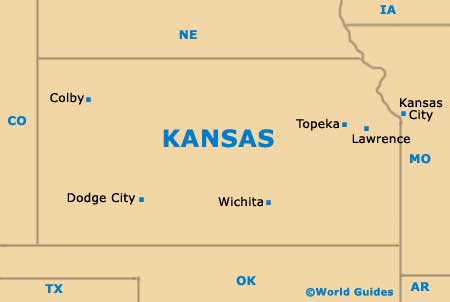